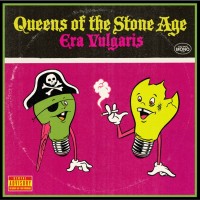 
Over the past 10 years, Queens Of The Stone Age, fronted by Josh Homme (ex-member and founder of legendary stoner metal band, Kyuss), have been releasing critically acclaimed riff driven alternative rock with some minor hints of trying to go beyond the bounds of their conventional genre, without breaking it. This time around, rather than releasing the spiced meat and potatoes rock they're accustomed to releasing (no matter how good that stew is), Queens Of The Stone Age released "Era Vulgaris", which can be best described as a somewhat experimental, avant-garde industrial-esque alternative rock. Although nothing revolutionary or to be considered truly "out there" (ala Arcturus or Unexpect), the album manages to stay rather interesting for its first couple of plays through.

Almost every song showcases this strange new experimental direction Queens' have taken. Whether it be strangely distorted, tuned or played guitars ("Turnin' On The Screw", "I'm Designer"), rhythms which test popular conventions ("Sick, Sick, Sick", "Battery Acid") or just pseudo industrial rock ("Misfit Songs"), Queens keep the album rather odd throughout. Even some of the more popularly conventional songs ("3's & 7's", "I Wanna Make it Wit Chu"), and darker songs ("Run, Pig, Run") manage to posses the aesthetically adventurous formula applied to them. Yet despite the anti-conventional directions they took with the songs, they still seem to posses a well driven alternative rock force behind them.

Despite Queens Of The Stone Age's adventurous efforts, the album somewhat flops in certain departments. Although most of the songs are rather unconventional in some way or another, some songs, such as "Battery Acid", tend to get somewhat annoying. Also despite the adventurous production of the album, if the distorted effects were taken away, the instrumentation is relatively stripped down, even compared to their older material (which may be a turn off to most people).

Whether this album is good or not depends entirely on the listener's taste, as it certainly isn't for everybody. However, if you're interested in listening to a rather interesting contribution to alternative rock, this album may end up being a pleasant surprise.
Written by Paradox0 | 23.10.2008