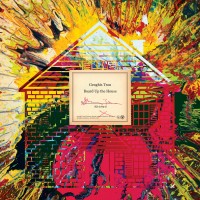 
Board Up The House is one of the most impressive genre bending albums I have heard in a long time, blending progressive/technical metal and electronic. It's catchiness is countered by its abrasiveness to create a wonderful symbioses.

This album would more accurately be classified as something along the lines of Melodic Progressive SynthPop Mathcore. It varies from their older material significantly, while still being groundbreaking. While the influence of grind is still there, the melodies seem to carry themselves over the occasional blurs of noise that Grindcore can sometimes become much more than their previous releases.

On this album, the pace has been slowed down and drawn out, which is wonderful, because it allows the incredible melodies, harmonies, and motifs to surface that these fellows are capable of to surface. The melodies throughout the album are very extensive and timing is impeccable (some of that is likely due to programming the drums, and possibly some of the synths, so is independent of the band's instrumental ability). A lot of the Mathcore influence and general sound reminded me of Mastodon ("Leviathan" specifically) due to its similar dense feel, but retaining accurate timing and speed shifts (especially in the middle of "I Won't Come Back Alive" about 3 minutes in). Not all the vocals are reminiscent of Grindcore and in that variety it gives it more depth. The occasional ambient vocals are another flashback to Mastodon. The synth melodies stand out more prominently than any other Grind/Mathcore bands (or ones that I have heard before). The synth duet at the end of "Board Up The House" comes to mind, where every few times through the motif one of the synths varies to make the melody more complex. Musically, there are some of the most invigorating builds and bridges I have ever heard, as well as some of the catchiest melodies in Mathcore. The electronic influence definitely gives it an edge, but this is in no way a novelty album. While they continue to merge electronica and metal genres, it is very different from the juxtaposition of the genres on their debut EP "Cloak of Love".
Overall, the creativity and use of modern instruments and programming to invent a genre make this a very interesting listen at the least. At the best, it is an involving experience of music, bridging the gap between the unlistenable and the listenable that Noisecore/Noise Metal has been needing for some time. This whole album is very solid and is in my top 5 of 2008 for sure.

I highly encourage anyone who likes Mathcore, Progressive Metal of any kind, synths/electronica in metal, or bands like Fear Before The March Of Flames, Botch, The Fall of Troy, Muse, or Dillinger Escape Plan to check out this album.