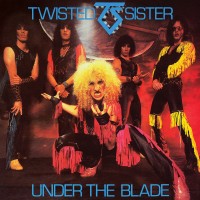 
Nowadays Twisted Sister are mostly thought as champions of commercial MTV-metal, but that is a rather one-sided view. From 1976 to 1982, the band had been part of the New York glam scene but with no record deal in sight the band moved to the UK to sign with Secret Records. Releasing "Under the Blade" in September, 1982 in the midst of the NWOBHM movement, Twisted Sister were very briefly among the heaviest bands around and therefore, despite lack of common acknowledgment, unquestionably influential.

The production here is very raw (regardless whether you intend to pick up the original recording or a reissue) and might seem too abrasive for this kind of music, especially if you've already heard their glossy later recordings. But that does not mar the album's effectiveness for long. In fact once you have gotten used to it, you will likely even appreciate the production for it's down-to-earth charm.

Mostly, the songs are blazing speed metal numbers, each one catchier and more intense than the last. "Destroyer" on the other hand has a doom metal vibe to it and "Shoot 'Em Down" (great solo) is the only hint at the pop-metal which would make Twisted Sister famous. Strangely enough even for a quasi NWOBHM-album, there is not a single ballad to be found, which is bummer since the band would pen down some really good ones in the future.

Aside from the more rockish "Bad Boys (Of Rock 'n' Roll)" (the only song that really suffers from the sub-par production) the entire album is an incredibly consistent and engaging listening experience. Recommended to fans of NWOBHM, speed metal and early thrash (that's right, you will dig this).