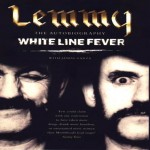 
Let's face it, any metal fan would never turn down the opportunity to get a cross-section look into the life of one of metals founding artists. This is the Ian Fraser Kilmister story told first hand in a straight-forward chronological form.

The great thing about this book (as is with many autobiographies) is that the editing is not too strict. Ignoring some technical formatting and grammatical "rules" is a fair trade for words you could actually picture the man saying. Judging by the actual contents of the book, Lemmy is a man who remembers characters, personalities and faces as opposed to the where & when - this is an upside to the book as well as its downside. Any dedicated fan of the band will probably want to know the characters of the key members of Motorheads history; this book is probably the most detailed description you will ever get without knowing the people personally. We learn about Fast Eddies skills in bare-knuckle boxing, Philthy Animal Taylor being constantly injury prone, or Mikkey Dee being genuinely insane at times.

Unfortunately, overall this book was a slight disappointment because of the content itself (or the lack there of). The first downfall (as previously mentioned) is that the when & where seems very hazy and poorly detailed at many points in the book, it will be unsure to the reader how he got from point A to point B, these holes in the overall story of the book become sort of frustrating. The second problem (which is not totally uncommon in autobiographies) is that by the end of the book I noticed he never seems to admit he was at fault at any point in time; the whole "woe is me" attitude seems to echo through many of the chapters which occasionally makes it hard to believe he's being entirely honest in this supposed "tell-all" book. The final issue I guess is not exactly a problem which can be blamed on the writer or the editor, it's that the last few chapters are almost unbearably repetitive, you'd think they accidentally double printed a few pages if it wasn't for the odd anecdote thrown in here and there.

All in all it is not a bad read. The stories are incredibly funny, and Lemmy's writing style adds a very entertaining flavour to the book. Unfortunately the book will most likely only be truly interesting for actual fans of the band looking for more background knowledge. If you are not a fan but rather just someone who is interested in the book for historical reasons, you will probably find it very dry and sparse at many points.
Written by Doc G. | 21.12.2008