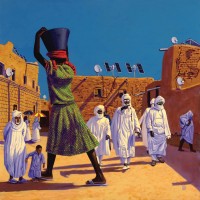 
The Mars Volta are one of those weird anomalies in the music world who never really seem to follow any kind of formula but seem to get a considerably large semi-mainstream fan base. Sure they release very accessible radio singles to draw potential fans to buy their albums (but to be fair, some of the best metal bands of the 80's did this as well), but past the single, their music can be explained as somewhere between progressive and avant-garde with a twinge of psychedelia.

With their latest release "The Bedlam in Goliath," following their trend of having each album have a distinct sound to it, this time chose to make their heaviest album to date. Luckily they returned with another concept album based on a very strange story (unlike their last album Amputecture), this time based around a ouiji board called "The Soothsayer" and the strange events surrounding it.

As for the actual content of the album, within the first second we're blasted with a very atypical opener for the Mars Volta, which can be best described as a wall of sound, not like the kind you'd hear in Wintersun or any kind of black metal, but an intricate, highly structured yet free from any kind of rhythm. Outside of the overall heaviness, the other thing which becomes immediately noticeable is the gigantic bound in improvement of the drum work. Although the percussion was never actually bad in any prior album, it gets a whirlwind of fresh air from new talent Thomas Pridgen, who can best be described as a drumming super prodigy (he won the Guitar World Drum off competition when he was only 9!). This is admittedly probably the best thing of the whole album. He stays on rhythm but never seems to repeat the same drum pattern twice. He's kind of like Danny Carey of Tool, just far more energetic.

Juan and Omar do a pretty good job as well, showing a variety of styles without ever changing the song in the song's genre, as well as doing some of their most technical work to date. Whether it's the funky guitarwork of "Ilyena," the Opeth like opener and overall jazziness of "Cavalettas" (which is probably more coincidental than copy-catting) or the almost thrashy "Ouroborous," the string instrumentalists will keep you on your toes. There is even some keyboard work as well, but this album definitely relies more on the rhythm section than psychedelic effects, although "Cavalettas" has a section which can be best described as Cedric (the vocalist) competing against distortion which increases as he increases his own pitch.

Speaking of Cedric, he's probably the only one who stepped back a bit. He just doesn't seem to have the energy or prominence he seemed to have in prior albums. That and the fact that not all of the songs stick out from one another nor get stuck in your head could be this album's only pit falls.

With this album they've once again struck a new kind of gold, even if this is one of their least accessible albums. Give it a couple of listens though and you'll be able to digest it all.
Written by Paradox0 | 15.02.2009