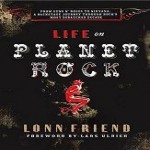 
Lonn Friend, the world's most famous tag-along, better known as the former editor of RIP magazine for those of you who haven't bothered reading through this book. This is his life story....well sort of, more of a compilation of his encounters with rock stars and a few tidbits about his fairly boring life thrown in.

The book begins with a useful introduction of/by the author, summing up who he is, which gives some reason as to why you should bother reading this book. He goes on to explain his early life growing up; which albums he played air guitar to, his first kiss, and other such things that could have been easily replaced by three words: "yadda, yadda, yadda". He eventually stops wasting perfectly good paper and gives the people what they want to read - personal stories about various big names in rock & metal. These stories actually turn out to be quite interesting if you have a taste for mainstream hard-rock or metal from the 80's/early 90's, like Metallica, Guns 'N Roses, Skid Row etc. It's also best if you ignore the incredibly cheesy rock-related puns like: "...Metallica let me in to ride their lightning". A big problem with this book was the attempt at telling as many contrived, seemingly profound life-lessons that he learnt from all the celebrities he's had conversations with, sometimes its way too many sap stories to choke down.

Obviously this book isn't all bad. As previously mentioned there are quite a few up-close and personal stories about various icons, which is probably the reason people buy this book, and the man delivered. Ignoring the content itself, the actual writing is done quite well - it's easy to read, the writing is straight-forward and direct (which should be expected considering Lonn Friend was an editor of a magazine); overall it was well well laid out.

All in all the book was a bit of a toss-up. While it did have interesting stories in it, I believe an autobiography was a really bad way to go about discussing rock stars; it just comes across as 284 pages of name-dropping. It also didn't help that he closes the book by talking about how great P.O.D and Linkin Park are.