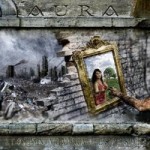 
After 12 years and 4 demos Aura have finally released their debut album „A Different View From The Same Side". So far, so good, nice album name, albeit a bit long, and the cover picture looks interesting enough too. The band consists of four people, the drummer doubling as vocalist, hails from Italy and plays progressive rock/metal.

For a prog band their sound is astonishingly easy to describe though. It becomes clear very soon that the keyboard is the main instrument on this record, often completely blocking out most of the guitar sound together with the drums. They play mainly progressive rock but have a few metal elements strewn in here and there. The music is always extremely melodic and rather slow most of the time. From time to time the band experiments with slightly jazzy approaches and the keyboards sometimes sound a bit electronic (too electronic sometimes?) and sometimes like a piano.

With his mellow voice Giovanni Trotta (who should keep away from the higher vocal parts though) manages to communicate a very soothing atmosphere and that's what this release is about for me. When compared to other progressive metal bands the structure-changes are quite unspectacular and although the musicians know how to play their instruments they certainly don't belong to the greatest players I've ever heard. However whenever you want to listen to something really relaxing and soothing than this might just be the perfect choice for you.

I can imagine that many potential listeners night get bored of this release very soon, but I can also imagine people listening to this as the perfect background music when they want a really relaxed atmosphere, especially from song 4 onwards. As for me, I don't see myself listening to this album very often, but right now I'd really enjoy having a relaxing, steaming-hot bath and enjoying "A Different View From The Same Side" with it.

By the way, tracks 5 and 6 are parts A and B of the almost twenty minute opus that carries the same name as the album and together they're my favourite song on this output. There is also a guest singer with a very nice voice on the last track, which is the shortest of them (being the only one under 7 minutes). Also I think that this CD could have been a lot better if the production would have been better! In some places it should have been cleaner and at others more powerful.

This is by no means an amazing album, but with the right occasion this can be awesome accompanying music. There are still quite a few things that could be improved on, but I am convinced that if Aura can get rid of its weaknesses and focus on its strength, this band might just be able to release a really beautiful album in the future.

PS: The two tracks they have on myspace are the first two songs off the albums and are two of the heaviest songs they have.