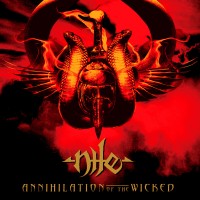 
01. Dusk Falls Upon The Temple Of The Serpent On The Mount Of Sunrise
02. Cast Down The Heretic
03. Sacrifice Unto Sebek
04. User-Maat-Re
05. The Burning Pits Of The Duat
06. Chapter Of Obeisance Before Giving Breath To The Inert One In The Presence Of The Crescent-Shaped Horns
07. Lashed To The Slave Stick
08. Spawn Of Uamenti
09. Annihilation Of The Wicked
10. Von Unaussprechlichen Kulten
11. Sss Haa Set Yoth [Japanese bonus]


What else can be said about Nile? They are far greater than the average death metal band with how they manage to successfully combine raw brutality and technicality with melodic and doomy elements, all topped off with an Egyptian theme. Annihilation Of The Wicked is no exception. If for some reason you haven't heard Nile before, you're in for a treat. With Annihilation Of The Wicked, Nile has taken what they had done before, and improved upon it in every way.

With this album, the band has taken a big step forward as far as production goes. It is a lot clearer than their older albums, yet not overproduced. It keeps that raw brutality that was present in Nile's previous work, and also enhances the melodic aspects. The musicianship is also excellent. George Kollias is an exceptionally talented drummer with feet like Gatling guns, pumping those pedals 100 miles and hour, while maintaining incredible precision and not missing a beat. The guitar work of Dallas Toler-Wade and Karl Sanders is great as far as composition and writing riffs goes, but a lot of the solos are, as always, lacking substance. (If you've seen their "Betcha Can't Play This" videos, you'll know what I mean.) However their vocals are phenomenal. Dallas has a very distinctive vocal style, being able to spit out rapid-fire lyrics while maintaining an extremely low, guttural growl.

The songwriting incorporates the Egyptian theme more than ever. The lyrical content focuses on the mythology and culture of ancient Egypt while mixing in gore by describing torture and violent situations in great detail. Karl Sanders has an extensive knowledge of Egyptian mythology and sets an aura of wisdom upon this album with the lyrics. The acoustic and doomy intros have a very atmospheric feel to them. The first one of these, "Dusk Falls Upon The Temple Of The Serpent On The Mount Of Sunrise" sets the tone for the album, while leading into a brutal assault known as "Cast Down The Heretic". A few songs on this album are rather long, which is unusual for death metal. However they are very epic and powerful, and won't leave you bored, or waiting for them to end and move on.

If you're a death metal fan looking for something different, by all means check out this album. It and all of Nile's other work is very unique and original, and is definitely something different. In 15-20 years, I can see this album being recognized as a piece of classic death metal like Death's Scream Bloody Gore, or Morbid Angel's Altars Of Madness are presently. Overall, this album is one of my favorites and I highly recommend it.