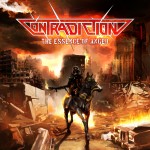 
Once upon a time, in a land far, far away, there was a practically perfect kingdom. A kingdom where Dragonslayers continuously waged battle to uphold the kingdom's only law: thrash till death. This magically vicious kingdom was encircled by a huge barley field. Only by traversing the field, the kingdom could be readily accessed. And so, as the years went by, hundreds and hundreds of followers of the thrash till death ideology walked upon those fields of barley, leaving several beaten paths. Nowadays, it's getting pretty hard to get to the kingdom of thrash without going off those beaten paths.
This review tells the somewhat tragic tale of a band that, although walking those paths for more than twenty years now, still hasn't left any momentous traces.

The Essence Of Anger already marks the sixth full-length in the Contradiction discography, and can also be regarded as the band's twenty anniversary album. For years now, Contradiction is a loyal disciple of the Teutonic Thrash metal sound. But unlike other mentionable bands in the scene, Contradiction never really achieved a major breakthrough, leaving them as a bit of an overlooked and more or less underground band. Despite the countless live performances over the last years, Contradiction still is die-hard-only material.

And those die-hard thrash fans are in for a treat. Contradiction maintains a simplistic yet effective formula: a fairly aggressive and heavy sound but with enough melodic tunes, hard-hitting riffs and wicked solos, so that your skull will be crushed in a reasonably accessible way. There's enough tempo variety to keep it interesting. Vocals are quite harsh and raspy (including the guest vocals of Dew-Scented founder Leif Jensen). Nothing to remark so far, this is all by the book. All things considered, Contradiction can be pretty well compared to a humming psychopath holding a kitchen knife in an empty grocery store: reasonably hostile but only mildly imposing.

What Contradiction does here on The Essence Of Anger, is bringing back elements of the old school sound once more, but with a modern and clean production. So yeah, Contradiction sounds not so new. But the main issue here is that they also sound not so new. The music, although being to the point, is not lacking in coherence, rather in diversity. Contradiction seems to be on a traditional thrash-only diet. The question here is: does this really bother you or not? After all, these aren't exactly the kind of songs you never heard before. For most people, forgetting a large chunk of their thrash familiarity is probably of overridden importance when giving The Essence Of Anger a go.

After twenty years in the business, Contradiction still doesn't have the same status and prestige as some other bands in the (German) thrash scene. The unsentimental answer is simple: some bands just don't have the state-of-the-art ingredients to be a superpower in the kingdom of thrash. So what? That doesn't mean those certain bands can't have what it takes to release eminently enjoyable albums. The moral of this story is: some bands are just bound to go down in history as the relatively undiscovered, second-choice gems - someone has to be - who maybe, compared to the real gems, are to a certain extent mediocre. But what if that someone happens to excel in named mediocrity?
Written by Thryce | 24.09.2009