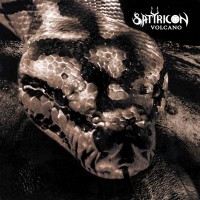 
The evolution continues with Volcano.
Satyricon now consider themselves "the state of the art" as Satyr used to declare, and that makes him feel free to create something new. But if on one hand this album is an evolution of "Rebel Extravaganza", on the other its evolution and style changing it's not so stunning as RE's was.

The album is a complex work, sophistication is researched in every single note [but not always founded] , and a good amount of elitarism and counscuiosness to be the leaders of the genre is displayed troughout the album.
The guest appeareance of Anya Garbarek, an high class norwegian jazz singer, daughter of the famous and great sax player Jan Garbarek [go and listen to some of his works with the Hillard Ensemble], for some singed parts show us how Satyr feel himself [and probably is] a part of the norwegian musical elite and want to express it through music and collaboarations.
In other words, forget about the low-fi, harsh, and poor black metal of the Dark Medieval Times. This is high class, refined, and elite Black Metal.
Dark Modern Times, folks.
And i'm not accusing them of selling-off, there's an abyss between Dimmu Borgir and Satyricon. DB are about "easy listening", Satyricon are here aiming for an highly evolved and refined vison of what is called Black Metal.
Do they achieve it? We'll see.

Only one thing i have to complain to Satyr. Track number 3 "Fuel For Hatred" the radio single of the album, also a videoclip from it. Lets say it: it has nothing to do with the rest of the album. Short, catchy and hard-rock influenced it is a song clearly made to be a chart-climber single. If you compare that with the very long and obsessively repetitive "Black Lava", you'll se 2 different conception of music: an easy listening song, and a song that is anything but easy listening, with its main riff repeated for minutes and minutes. The other songs are closer to that last one, but they show the reaserch for variety and complex arrangements that Satyr was pursuing when writing the songs.
Less mechanical then the RE's one, the sound of "Volcano" is really different. A thing we can tell for sure is that Satyr slighly abandoned its trademark riffing for a more "hard rock" riffing, even if some grim riff appears here and there. Times are generally slower, Frost's double bass it's not so used as it was in RE.

Now, the main bad point is: sometimes Volcano is boring. I can't tell why: it's played really well [Frost's drumming is always very precise -even if not fast as it was in RE-] and perfectly produced, but the songs have always something that makes them feel "not new".
The clear example is Black Lava: the clear proof that Satyr's "artistic freedom" tend to became "delirium of omnipotence": 2 minutes of refrain? With the same riff?
I can accept it into a very good song, i can accept it in Burzum's "Hvis Lyset Tar Oss" album, but that's another kind of Black Metal, totally different.
In Volcano's context it just sounds boring after the first 30 seconds.

Ok, it's a really good album, good ideas, welll structured songs, professionally played and produced. But from the mind beyond RE i was expecting more in terms of evolution

If the old school Satyricon's album were some rusted yet really sharp daggers, and if RE was a killer white glass razor, that Volcano is a Black Stainless Steel war-knife, even if not so sharp, and sometimes too shining to seem dangerous.
Written by Sephiroth | 11.10.2004