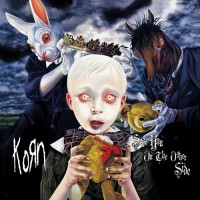 
I'm not a huge fan of nu-metal right now, but Korn used to be a favourite of mine. They've been trying to re-invent themselves for a while now, from the electronic beats and strings on Untouchables to the hard-hitting Take A Look In The Mirror, to the borderline-electronica of the untitled album. But I still think that this album, where Korn went industrial, was their most successful attempt at reinvention yet, and made the untitled album even more disappointing.

Firstly, Korn brought on two big-name producers - Atticus Ross, of the band 12 Rounds, and at that point working with Nine Inch Nails; and the Matrix, a group whose clients have included Hilary Duff and Avril Lavigne. Jonathan Davis also steps behind the boards, as he's done for every Korn album since Follow The Leader (bar Issues). While hardcore Korn devotees gnash their teeth at having their heroes in proximity to Hilary Duff's schlockmeisters, it worked. Take lead single "Twisted Transistor", for example. It's laden with pop hooks, Munky's simple riff takes center stage, and Jonathan Davis isn't singing with rage, but rather with a kind of morbid happiness. Amazingly, this is one of the best songs they've written in a while, grinding away with thick industrial rhythms and morbid imagery of sex and violence ("hold it between your legs, turn it up, turn it up"; the distorted growl of "This won't hurt a bit" near the end). This is Korn, and pop for them is anything but fun.

"Twisted Transistor" and the other two singles, "Coming Undone" and "Politics", take center stage on this album. "Coming Undone" is another one of their better songs, stripped-down, crunchy and stomping away, reminiscent of Take A Look In The Mirror. "Politics" is another pointed stomp, but there's some wonderful synth ambience courtesy of Atticus Ross, and Davis' rant about not caring about politics is really quite useful for this day and age. Three of Korn's better singles, to be sure, but there's some other gems buried in the mix. Davis' contorted vocals sound, not filled with rage and vengeance as they did on Follow Your Leader, but more three-dimensional, able to express more emotion. And with Head's departure, the three remaining members besides Davis sound downright vengeful, Munky's sizzling seven-string attack, Fieldy's slinky, funky basslines and David Silveria's pounding rhythms beating the songs into your head.

The album tracks are just as good. Sure, there are some failed experiments - they try a bit too hard to be Nine Inch Nails on "Throw Me Away", "Seen It All" doesn't blend its influence successfully, and the bonus track "Eaten Up Inside" is just that bit too slick - but hey, there's some great ones too. The Nine Inch Nails influence works on the synth-rock rhythms of "Open Up", and the heavy metallic grind of "Liar" and "Getting Off" remind me somewhat of Follow The Leader.

Overall See You On The Other Side is a good album, with a few mediocre tracks. But hey, Korn have reinvented themselves, and very nicely at that. Actually, on further reflection, it might be their best album. Their follow-up, on the other hand, is their worst...but that's for another time.
Written by [insert name] | 09.10.2009