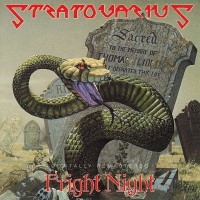 
The debut album by Stratovarius. For crazed fans of this band (like myself) this is just as great to listen to as every other release. For people who want the same power metal they heard in Visions... expect something very different. This album has been given quite a high rating, because many people rate this low, forgetting that this album is one of the pioneering key orientated power metal albums. It is a significant album and if you like a much older sounding and heavier power metal style, this is for you.

So what are the good things in this album? It is creative (as a whole), especially the guitar work. You can also hear elements of Visions and Episode at times in the album. At the same time, the sound is much heavier, with some elements of NWOBHM and even thrash metal can be heard at times. This style only prevails in the first three albums, Fright Night, Twilight Time and Dreamspace. From my knowledge, this has only sold 20,000 copies since 1989. What lets this album down so much to the others is the production - It sounds like a VERY OLD album and the recording of the drums is a real let down. The lyrics are also long from classic. With these two exceptions, there are also some songs that seem like "fillers." Put all these flaws aside, and you still have a very original album that helped start the genre of Power Metal.

It reminds me of Helloween's Walls Of Jericho and even Blind Guardian's Battallions of Fear. So I would recommend that you also try these releases if you are a fan of Fright Night. Many Power Metal bands have notably moved well away from this old and heavier style of playing.

Here's a basic sum up of highlights of the album: "Future Shock" (the first and best song on the album by far) starts off well balanced. The remaining part of the first half of Fright Night is creative with a lot of great guitar solos, but are less catchy and memorable as "Future Shock" is. The second half of the album gets a bit more progressive; something they bring into their follow up (Twilight Time) - but they do a much better job on that album. Antti Ikonen is rarely heard in the first few songs, but when you do hear his keyboards, they give the album a very dark atmosphere.

If you are a huge fan of this band, then get this release after getting several of their other albums first. If you wanted a Visions... avoid it. It irritates me how people forget how unique the album is though. Because of this fact, I think 8.5 is a very fair rating.