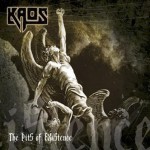 
KAOS, not to be confused with the similarly named terrorist organization of "Get Smart" fame, are a Hayward, California thrash band that formed way back in the late 80's, when the local Bay Area scene was the stuff of legend. They released albums in 1990 and 1991 while playing with the heavies in the industry, then opted to go on the Tool/Wintersun plan of releasing albums with about the same frequency as Halley's comet passes. 2003 saw Kaos Among Us and now 2010 sees The Pits Of Existence.

Their newest opens with an all-too familiar noise for us old-timers, the horrid screech of a dial-up modem (shudder), a garbled transmission announcing America was under attack, before the thrash floodgates open and the band erupts into "Bleed Some More."

The production is middle of the road - (thankfully) not quite that super clean shiny modern production that lots of thrash-revival bands have been using, nor is it as "sloppy but enthusiastic" as the production in 80's classics, although I think it would perhaps benefit being a little more on the raw side.

And of the thrash... the band make a point of proclaiming their Bay Area heritage on their promotional materials, but the band that I'd liken them to most, for sake of comparison, is Dead Head from the Netherlands. Particularly in the vocal department, which is more harsh in delivery than Bay Area stalwarts. It works, though, against the production, adding a level of harshness.

The press kit came with a nice sheet of paper with some group history, a pic of the new album art, and a track list with little red asterisks next to the recommended tracks. Their suggestions were "Bleed Some More" (one of the stand outs), "Pits Of Existence", and "Let God Sort Them Out", which features the catchy chorus "Kill 'em all and let God sort 'em out!" - which rapidly loses catchiness as the band repeats it around seven thousand times. Okay, maybe eight times each chorus, but with short verses in between, it just makes it feel too drawn out. Almost like that running gag in Family Guy when Peter falls, bangs his knee, and proceeds to make 'in pain' groans for the next two minutes. Still, I imagine it would be a fun song to shout along with while doing the Toxic Waltz in the pit at a live show.

Meanwhile, the back half of the album had the songs that I found myself gravitating towards... "Out Of Time" is a great galloping track which is positioned perfectly as a follow up to the eerie "Blood Sacrifice". The band itself, to my ears, were at their best in songs like "Out Of Time" and "Bleed Some More" when playing at full throttle.

"Sludge" slowly comes to a boil as the song develops. Not in the eerie/clean intro, as is common in the Thrash genre ("Fade To Black", "One", "Spill The Blood"), but a slow, crunching riff with some simplistic drumming that both build in urgency, intensity, and velocity as the song progresses. Because of the nature of the build up and boil over, this is probably my favorite track on the album.

"Screaming In The Mirror" is another stand-out song featuring a pretty cool intro riff and some nice creepy vocal work, and a few nice leads tucked in. Finally, the instrumental outro, "Exit Reality" does a great job in closing the album on a good note.

So all in all, these guys aren't offering too terribly much new, but hey, the genre has been around for nearly three decades now, and the band for two of 'em. And they certainly deserve credit and respect for soldiering onwards. The album features a handful good tracks, a couple "meh" tracks, and some production that perhaps saps a little from the vitality of their work - I imagine KAOS are like thrash new kids Warbringer in that they bring it live a lot better than could be captured on tape in a studio.

If you dig the thrash metal, give 'em a listen.