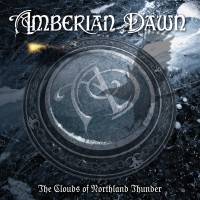 
After their successful debut, Amberian Dawn returned in 2009 with its follow-up The Clouds Of Northland Thunder. Anticipations were high and it seems like the band did not disappoint their fans. The Clouds Of Northland Thunder is not only production-wise better; this record shows a great improvement in the musicians' skills. Apparently, the band grew in confidence and remained faithful to their usual style.

Similar to River Of Tuoni, the band's second album contains mainly lively songs, as well as a couple of slower ones. I have to admit that ballads are definitely the weaker side of Amberian Dawn; however, "Willow Of Tears" is probably the only strong ballad of the band by far - starting with a tender introduction and continuing with an emotional and captivating verse. On this record, there are a lot more faster and longer guitar solos to be heard. I can still state that Amberian Dawn is not the type of band that relies on solos and their effect on power metal lovers simply because of the fact that this band's music is not all about praising and proving musicians' abilities. But still, riffs and solos do appear more often on The Clouds Of Northland Thunder than on the band's previous release.

Tempos and rhythms vary from song to song, as for example on "Shallow Waters" where mid-tempo verses float into a fast chorus. Tracks like this one, among most of the others off the record, show the complexity of its compositions. Obviously, all pieces were performed with mastery and larger experience. Drum parts have become more difficult and Heidi's voice has even polished. This time, previously-inappropriate-grunts have given way to clear male ones which definitely fit in the band's style. Moreover, the perfect balance between vocals and instruments is again evident on the album. Lyrically speaking, The Clouds Of Northland Thunder is not anything special and new to metalheads. The slight difference is that during the writing process, the band decided to base some of their lyrics on Egyptian mythology, too. Amongst the best songs off the record are "Incubus" with its theatrical chorus reminding of tracks such as "Passion And The Opera" by Nightwish, the touching ballad "Willow Of Tears" and "Shallow Waters," as well.

By releasing their second album, Amberian Dawn proved they are indeed worth a listen. People who label their music as non-existent "owl metal" are blinded and foolish (I would even say quite incompetent, as well). On The Clouds Of Northland Thunder, Heidi Parviainen's voice has improved and become even more impressive than before. Tuomas Seppälä's writing skills are on a whole new level and show his unarguable talent as a composer. Symphonic metal lovers will definitely find listening to this album is not a waste of their time.