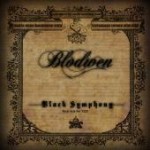 
Blodwen means 'white flower' in Welsh language. A suitable and original name for a symphonic rock group from Indonesia whose style has also been categorised as neoclassical and power. This group has issued their debut album Black Symphony (now this name has been a bit too popular for some time already but that's not the point anyway). It is, however, very pleasant to hear from bands hailing from exotic countries like Indonesia.

The album itself is a rather well written piece of simple symphonic rock. As soon as the first song starts rolling, memories of Nightwish-metal bands such as Visions Of Atlantis pop into mind. However, the music sounds more modest than the brilliant works of Tuomas Holopainen. That is the case with quite a number of bands who sometimes tend to rely too much on basing the whole music on the simplified motifs of older bands. One would like to hear something new, something more bombastic. Blodwen seem a bit timid here at times.

The frontwoman of the group, Bernice Nikki has a nice voice, however, it doesn't seem to get the opportunity to sound at full strength at some places. The growling vocals that appear in the second track "Midnight Fairytales" slightly interrupt this otherwise grand song. The production could also be a bit clearer to let the female vocalist and the melodies truly shine. As stated previously, many Asian bands are nowadays copying often generic western acts. I am glad to see that Blodwen are better than that as there is a clear local feeling to be noticed. The Japanese rock influences have obviously created a strong and loyal fanbase in Japan. I am sure this album contains songs that will make their way to the playlists of J-rock fans of any country.

The opening song, "World As One" is good and catchy but balances on the verge of being Visions Of Atlantis style Nightwish-rock. "Midnight Fairytales" is a positive and nice fantasy-inspired track. Now the true value of this album lies in slower melodic songs such as "Cry Out To Me" which really brings out the romantic and beautiful emotions and colours of Bernice's voice. Plus the pleasant "Flower Song" and the melancholic "Two Notes". "Pengakuanku" is a great song in Indonesian which stresses the originality of the group. A candy for the lovers of Japanese culture is the beautiful song "Your Wings" along with it's romantic guitar version. The orchestral version of the title track is also a good one which gives hope of a bright future for this band. All in all, this band has all it takes to become Asia's first leading symphonic rock act.