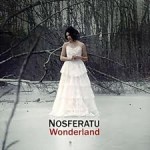 
The cult UK gothic rockers Nosferatu after more than a decade of absence, set aside some live shows, compilations and singles, managed to return. They are most well-known for their Louis DeWray Rise and Legend era after which they never were that great nor had the chance to keep their name written with golden letters in the history of gothic rock (The Prochecy, Prince Of Darkness and Lord Of The Flies were never enough). Well, DeWray is back in the house and after a long time since he returned Nosferatu finally released their next full-length, Wonderland.

Don't expect the immense atmospheric and haunting aura of traditional gothic rock a la 1993-1994, the band had already changed, the scene has changed, the times have changed, so there was no way Nosferatu would present something as great as Rise/Legend. And I totally understand it, for some time now Germany's been running and promoting the whole gothic rock/metal phase to a whole new-romantic, melodic vein which has its roots in Wayne Hussey's The Mission. And Nosferatu couldn't be missing from the gothic rock map, henceforth Wonderland follows the aforementioned recipe. Only the opening track "Horror Holiday" and a few more independent moments here and there hold part of the early days' magic.

Despite not being totally themselves, they know what they're doing. Wonderland presents an amalgam of heart-felt vocal lines, inspired riffing and gothic rock chords, beautiful keyboard/piano passages and a rhythm section that serves its purpose well. Louis DeWray might not possess anymore his renowned haunting, deep accent and interpreting manner of the band's first era, but he utterly makes love to the microphone in a seductive way. The atmosphere relies in fragileness and melody but there are definitely some heavier moments from time to time and of course I shouldn't forget to mention the already covered a thousand times before interesting version of "Somebody Put Something In My Drink" (should I say now who's written the original?).

Wonderland is a pretty decent work, it will probably not appeal to the traditional cowboy hats and leather jackets but the audience of gothic rock's modern aspect and a welcome amount of gothic metal fans will appreciate it more or less. After all, it's Nosferatu with DeWray despite the new air the band's breathing.

Written on 07.07.2011 by
KwonVerge
"It is myself I have never met, whose face is pasted on the underside of my mind."
More reviews by KwonVerge ››