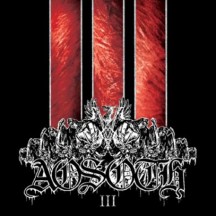 
MkM of Antaeus fame and BST with INRVI from the underground pits of hell (VI) strike back with the third psalm of Aosoth's Dysangelium with a simplistic yet to the point title, III. The cover artwork is in the same vein, minimal and to the point, with the emblem of the band and an imposing scarlet III catching your attention due to the black font.

What I enjoy quite much during their short drive so far has to be the fact that they never had the same production in any of their releases. Whereas their self-titled debut work was dry and hostile like the desert and Ashes Of Angels had a more massive and clear sound, their latest effort possesses a more ominous and misty sound that adds to the overall ambiance and strengthens the atmosphere the compositions want to present. There are moments the album depicts a more ambient/industrial aesthetic through parts that either present a more floating vibe or a more mechanic edge respectively. Of course I shouldn't skip that there are moments a successful combination of both aspects is quite vivid, like on the third track. It's pretty obvious that Aosoth have given enough space to more mid-paced and dissonant passages; of course without forgetting how it feels like to offensively fasten their march. A big plus in the overall sound-portrayed world the band wants to present has to be the guitar sound. From the slowly fading effects to the desolate harmonics and from the sharp, railway riffing to some noise-infused fierce assaults of sheer brutality everything seems to be in the right place for the right reason. MkM's interpreting moves in the renowned hoarse, nearly-reciting pathway with some extended and internal outbursts of elevating intensity that escalate the flow of the compositions. The drumming is outstanding. Either imposing or accompanying, it serves its purpose well while some tricky ideas and/or effects here and there enrich the surrounding sonic turbulence in perfect harmony with the pounding bass lines.

While their previous works had a more straight-to-your-face essence, their latest effort boils in darkness alone, it hates in solitude through its more introvert nature. With III, Aosoth managed to present black metal with a fertile ground for gloomier yet dissonant soundscapes; neither pretentious nor losing in aggression.

Written on 28.08.2011 by
KwonVerge
"It is myself I have never met, whose face is pasted on the underside of my mind."
More reviews by KwonVerge ››