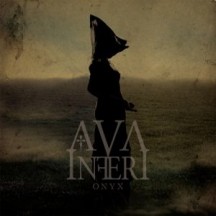 
Portugal has its own dynamics in the atmospheric gothic/doom metal scene, of course every band affiliates more with some of the aforementioned characteristics and I don't place every one of them in the same generic category. To be more precise, Ava Inferi move towards a gothic metal destination while they infuse a doom-driven vibe within their compositions.

Two years have passed since their previous effort and i was really curious what would success Blood Of Bacchus which was good, but not captivating. And it was during the second month of 2011 I received the answer I was hoping for, Onyx. It wasn't only the highly atmospheric and mystical cover artwork which was framing this release that filled me with enthusiasm, it was also the like-minded aesthetic of the music which was pacing hand in hand with the first impression. Mystique, inspiration and charm, that's what I witnessed during the very first listen and with every experience everything was becoming more intense and I could dive deeper into the band's plans. Onyx devours you gently and captures your senses within a hallucination with its eerily beauteous aura. You get the feeling as if you were awake but dreaming in safe waters, when it's like a siren leading you to your doom as the overall ambiance becomes menacing and hostile. And then there's nothing you can do but wallow in your grief.

Gothic rock chords flood with mystery the fertile shores of Onyx with Rune Eriksen and André Sobral cooperating wonderfully together whether they forge some sort of floating riffing or depict a more fragile aura through the echoing melodies and the acoustic ideas. The guitars have to be the first factor in terms of atmosphere, the second one are definitely Carmen's either more ethereal or more operatic interpretation. There are moments she sounds ecstatic and lends an imposing vibe which overruns the compositions and strengthens the unearthly beauty the rest of the band evokes. Like a muse of her age, she entrances the tunes with heart and soul and designates the grandeur of their hidden nature to our mortal ears. I could say that this interpretation enthrones her as one of the most solid and qualified singers in the whole gothic metal scene of the recent years to say the least. Concluding, the rhythm section lends groove to the compositions with their subtle but apparent vibe whereas some samples/effects/keys along with few but to the point Johan Edlund oriented male vocals ("The Living End") complete the circle.

If I had to pick between some bands which I could mention as Ava Inferi's references then I'd say Theatre Of Tragedy due to the ethereal and elegant nature of Onyx and Faith And The Muse due to its mystic atmosphere. Allow me to say that I found some slight but relevant Therion ideas here and there, the beginning of the self-titled track for example and some sparse moments here and there. Yet, as it happens with most of the albums, Onyx isn't faultless, after the first half "Majesty" and "The Heathen Island" don't keep up to the high expectations the previous four songs managed to forge. The band though proves its worth and reclaims the throne through the beauty of the following ending compositions, "By Candlelight And Mirrors" and "Venice In Fog" (awesome title!). Henceforth they revive the grandeur the album possessed, closing it in the most appropriate way.

Nevertheless, despite its small decline which prevents me from recognizing Onyx as a stellar release, it happens to be one of the best gothic metal releases for so poor a year for the genre.

Written on 06.09.2011 by
KwonVerge
"It is myself I have never met, whose face is pasted on the underside of my mind."
More reviews by KwonVerge ››