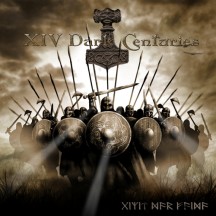 
Heritage; tough burden, isn't it? Through older times people used to defend or expand the common knowledge of their area through fire and iron. Nowadays in a modernized world where everything has become a colony of technology and everything happens for one reason, money, the most sincere cause to delve deep into the ancestors' nest of nostalgia has to be music.

XIV Dark Centuries, after five years of silence, pass through the schism of time once again. This time their battering ram comes under the crest of Gizit Dar Faida. More conscious of their actions they manage to present their most complete work to date in terms of atmosphere. The guitar riffing marches onwards and the rhythm section follows cantering. And guess what: you have to adore the guitar melodies that fill the soundscape with lyrical eloquence, either as leads or solos. Their slight echoing edge at times evokes a divine sense, something that paces really well with the many sing-along chanting passages that escalate the heroic vibe and enrich it. Needless to say, the boiling grunting battle-cries make the ambiance more intense and lend more strength to the core of the compositions. The keyboards are not that much this time, but whenever they make their appearance they hold a rewarding and uplifting ecstatic aura.

Something that you may notice is that the album is harmonically scattered into equal pieces. "Westwärts", which works as an intro, acquaints the listener to the elder's tunes. Then, you fall upon a bastion of four compositions willing to thrill you with their war-provoking spirit and lyricism until you stumble upon the beautiful acoustic interlude "Eichenhain". The album keeps up with four more songs that, despite the fact that they keep the dynamism of the first half, tend to embed more melody and atmospheric brushstrokes. "Ausklang" closes the curtain and leads the cycle to completion as the outro of this tale. XIV Dark Centuries appear more balanced than ever before in a solid effort that won't disappoint their hordes. Melodic yet powerful, atmospheric but without exaggerating, their latest effort is here to open once again the gates to an older domain.

Forged in fire and steel, but also nostalgic, Gizit Dar Faida strikes in military formation. This is Thuringian Metal in its most anthemic form which storms from the glorious ancestral past to inflict its heathen aesthetic on the present.

Written on 01.10.2011 by
KwonVerge
"It is myself I have never met, whose face is pasted on the underside of my mind."
More reviews by KwonVerge ››