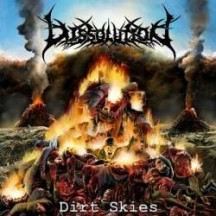 
This album is all over the death metal boards. There's some melodeath, a little tech-death, and a large amount of the bulldozing-through-occupied-nursing-homes-type, straight death metal. But the one thing Dirt Skies is through and through is an album that lives up to its damn title. It's dirty.

Thing is, not really in good way. I mean, there's murky production and then there's bad production. This will occasionally lean toward the latter, but mostly it's the shitty side that it rolls around in. It's too stripped-down and dull-sounding. Gives me that thick-palm feeling I get when I go into a bathroom then come out having not washed my hands and it reminds me of Pig Pen from the Peanuts cartoons. And what a sad fuck that character is. No water-source in a home with children? That's not funny. What if he got polio and choked to death in his vomit. Pretty sure polio was still a thing back when Charles Schultz was in his prime. And don't the kids in that cartoon live in the suburbs? The fuck is going on.

Luckily, Dissolution have some serious chops. The riffing here, in particular, is something to really tip your hat at. Songs trundle along seamlessly, shatter into techy passages, then melt back into trundle-mode smoothly. Makes for some damn fine listening. The vocals are good too. Generic, but performed really well.

This is a would-be great album that was brought down by a failed approach at making the album sound extra-raw. It's dirty, fuck yes, but not really in a good way. Definitely worth a check-out, but these guys need some engineering help to become a drop everything band.