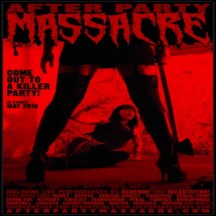 
Well folks, let me tell you how I spent the last 77 minutes of my life; watching a death metal themed shock film called After Party Massacre. While it's not something I regret seeing by any means, the only phrase that comes to mind here is "what is this? I don't even..."

So it's safe to assume whenever you watch a movie with the word "massacre" in the title, you're not in for any Criterion Collection experience. Nope. It's blood, guts, and if we're lucky (which we are) some gratuitous sex scenes. Basically this movie just follows the average evening for Incantation drummer Kyle Severn; playing a show, drinking & swearing a lot, making fun of dudes wearing Opeth t-shirts etc. Meanwhile, some chick is running around ruining everyone's shit. People die, there's a cool death metal soundtrack yadda, yadda, yadda. Unfortunately, what starts off as a cool mindless slasher flick with an even cooler soundtrack spirals into a series of choppy scenes of killings and nudity. If it feels like your losing the thread of what this movie is about, that's ok, I'm not even entirely sure it is about anything. After Party Massacre creates a whole new meaning to the term "low budget". The dialogue sounds like it came straight out of Trailer Park Boys, and the acting seems like it belongs in some mid-90's anti-drug PSA. Don't even ask about story line.

Silly me, here I am trying to critique a movie that was probably never meant to be considered under any sort of serious critical microscope, and in it's own way it is sort of intelligent.

...Wait, whaaa? Yes, intelligent. As completely pointless as this movie may seem, it actually appropriately reflects the whole death metal theme; like death metal, it's gruesome, raw & unapologetic, even if at times it may seem extremely incoherent and fragmented.

The movie comes in two formats: The cut-down version which only features small clips of some of the songs being performed by the featured bands, and the full version, which includes the full songs. Whatever you do, be sure to stick to the full version. The cut down version comes across as a crappy movie, while the full version almost seems like a death metal dvd with a mini-story thrown in between the songs.

If nothing else, it's got a really sweet soundtrack.