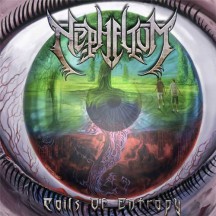 
Nephelium play the sort of brutal death metal that would, if listened to in the right, inappropriate context, get you to headbutt the shit out of the sickly puppies in your local, McLaughlin-endorsed Humane Society's cages one by one and without remorse. Coils Of Entropy consists of the sort of relentless brutality that will take a brick repeatedly to the face of your moral compass and make you want to bite things. It's brutal shit done right.

Don't want anything new from brutal death? Well then, you should be happy with this. The riffs are thicker and darker than the liposuction leftovers of the Rodham brothers, the vocals sound like the prison-lab roars of a Charles Manson-Tiger-crossbreeding experiment gone horribly right (listen to "Malediction" asap, particularly the last minute), the solos are eerie and evil-sounding, and the drumming is solid throughout. And all that makes for some fine listening in the end.

Nephelium seem to have focused on their songwriting/performance, talent-exhibition departments for this. This is a "fuck you" to originality and, almost to the same extent, to uniqueness. It just happens that this is good enough to warrant listening to if you enjoy good old brutal music.