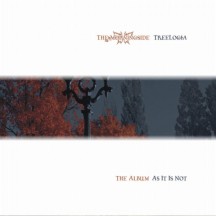 
The Morningside seem to be the Wolves In The Throne Room of melodic death/doom metal. TreeLogia (The Album As It Is Not) sees three nature-themed/influenced songs total in at over 45 minutes, including a four minute somber intro coupled with the sounds of rainfall before a melodic, melancholic guitar line introduces the music proper. The album is one prolonged piece divvied up into three songs, conveniently titled "The Trees Part One", "The Trees Part Two", and, you probably guessed it, "The Trees Part Three: TreeLogia".

TreeLogia (The Album I As I See It And Will Describe Whilst Practicing Alliteration) marries mostly melancholic moods against majestic melodies.

The prolonged songs go through different phases as they plod along. The tracks are pretty much driven by slightly sorrowful melodic guitar leads, which are oft accompanied by subdued symphonic support and nature noises. At times they all coalesce and swell into majestic crescendos (well, as much as largely sparse, slow-paced, and sad music can crescendo), and at other points it all just drops away leaving just the stark, naked guitar line to carry the song. The growled/rasped/deathified vocals are perhaps the only particularly edgy aspect of the album.

The three songs are, as labeled, pretty much just one prolonged piece separated out into three tracks. It could just as easily be six or seven with all the various build ups and sonic recessions to near silence in the longer pieces. The nature of the songs makes them a bit ethereal. When reflecting on the album, I don't really recall songs or even segments of songs, but rather just the general mood that the pieces inspired. But I guess with this sort of music, the ability to convey a mood is perhaps more important than imprinting a cool riff.

All in all I found this an enjoyable, if not memorable listen and is definitely worth checking out if you like the concept of nature-fueled melodic death-doom.