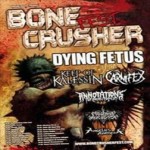 The extreme metal juggernaut that is Bonecrusher Fest is back again this year and promises to be bigger and more brutal than anything that has come before, showcasing the very best of the extreme metal talent from around the world all packaged up and ready to be unleashed on European audiences. Brought to you by Avocado Booking, the agency behind the phenomenal Never Say Die! club tour, Bonecrusher Fest is set to melt faces all across Europe!

This time the bill is comprised of: Dying Fetus, Keep Of Kalessin, Carnifex, Annotations Of An Autopsy, Fleshgod Apocalypse, and Angelus Apatrida.

Legendary death metal heavyweights Dying Fetus return to support their crushing latest full-length Descend into Depravity. One of the most infamous and influential death metal bands of the past 10 years, Dying Fetus pummel and pound their signature-style brutality into the worldwide landscape with the subtlety of full-fledged war.

Norwegian extreme metal veterans Keep Of Kalessin is a compelling example of melodic black metal at its finest. The band took third place in the grand final of the national Eurovision Song Contest called "Melodi Grand Prix" which was held in February in Oslo.

Armed with their latest album Hell Chose Me, Carnifex require no introduction. With only two albums under the belt the the five-piece have helped elevate death metal to the masses in part to their relentless worldwide touring.

Annotations Of An Autopsy take no prisoners. They are one of the European pioneers of modern brutal death! The new album The Reign Of Darkness is a testament to how the band have evolved into the wrecking crew they have now become; hug slabs of groove and pounding intensity.

Opening up the tour is Angelus Apatrida. The band perfectly combines both the aggression and the melodic edge of classic 80's Thrash Metal roots with a breathtaking modern southern fury to result in an impressive blend of rage and attitude.

Dying Fetus's singer John Gallagher has this to say: "After touring the ENTIRE WORLD in 2010 we cannot think of a better way to start off the year 2011 than back in Europe. We cannot wait to witness the breaking of bones and the crushing of skulls as we headline Bonecrusher Fest. The line-up promises to the fans in each and every city that they will witness the most BRUTAL and AGRESSIVE tour for all of 2011... guaranteed. Bones crushed!"