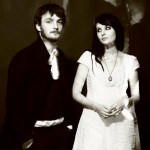 Good news arrive from the French group Les Discrets, their new album is in the works. Fursy Teyssier planned to release new music on a project called Sainpaul but that idea won't come to fruition because it has been decided that the music composed for that project will actually be used for the new Les Discrets opus. So, you can expect something different on the album that will follow Ariettes Oubliées....

Latest update posted on the band's Facebook page: "I often need time to precisely know where to go, what to do etc. That's indeed the case with Les Discrets too and recently I came to the conclusion my attempts since 2 years to compose 'metal' songs failed as I just don't feel to play that music anymore. Beside those attempts, more than a full album took birth for a project I'd have called Sainpaul. Took me time to understand why. Fact is that it won't be any Sainpaul album. Those new songs are just what I've in mind at the moment and I decided to release them via Les Discrets, which in the end, is the musical project of my life. And people who listened to it agree with me on that point. I'm also very confident that if you like the old Les Discrets, you'll like the 'new one'. So well. Now that I feel comfortable with that idea, I'm starting to work the songs again to improve them and make a brand new Les Discrets album. No idea of a release date or so, just a super great motivation and high inspiration! It's certainly going to sound big, fresh, a bit more positive and more contemporary!"

If you are curious, you can listen to a demo song from the Sainpaul project below.