Show more
In The Woods... - Are Back After 14 Years, New Vocalist
News index | Most popular | RSS feed 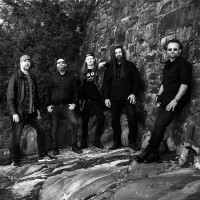 Norwegian progressive metal cult band In The Woods... are back after 14 years! You might remember that they disbanded back in 2000. The band announced their reunion and also unveiled one of the new members of the band, the new vocalist. Of three candidates, Tommy Sebastian Halseth was their first choice. Tommy has done a lot of different stuff, ranging from Godsend, through Atrox, Griffin, Wattamezz and also live vocals for Manes. Tommy has received full control of the lyrics on the upcoming material. The band plans to record two albums, beginning next year with the first.

The band has recently posted this message on their Facebook page: "Back into the woods. The woods are full of trees, some old, some not. Some have been cut down, some recycled, and some are still standing, defying the harshness of the nature. This goes for the Kristiansand-based band as well.

"Some of the trees have decided to rear their ugly heads once again, with a battle plan including the recording of a two album concept. This was already back in 1999 ready for completion but for obvious reasons was left behind after the band's decision to discontinue In The Woods... Later this month the members will get together, rehearsing, working and polishing and use the time needed to ensure perfection and highest level of quality needed to continue the In The Woods... legacy. Part one of two is today planned to be recorded in 2015.

"During the period prior to the farewell gig in Kristiansand 14 years ago, on the 29th of December at Caledonien Hall, the lineup changed several times. But a core, consisting of original drummer Anders Kobro and the Botteri twins Chris and Christopher, has always been present. The lineup today consists of these three aforementioned gentlemen, as well as several other musicians which will be announced soon - in addition, a very good replacement that will fill the shoes for Oddvar who tragically left us last year, R.I.P dear friend and brother, you will always be a energy In The Woods..."