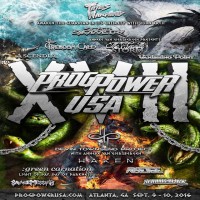 As always, as soon as ProgPower USA current edition ends, the line-up for the next year is announced. And ProgPower USA 2016 will be big. Already confirmed are performances by Devin Townsend with special guest Anneke van Giersbergen; Fates Warning playing Awaken The Guardian in its entirety with singer John Arch; Green Carnation performing Light Of Day, Day Of Darkness in its entirety; Scar Symmetry, The Gentle Storm and many more.