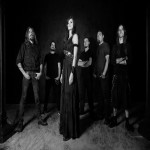 Following the 2015 Sensory Records release of their album The Great Lie, France's epic symphonic metal collective Melted Space has issued special remixed versions of several tracks from the album through a new digital EP, titled Remix Remodel, which is now streaming online. Additionally, an official video for the revamped version of the track "Titania" has been completed, and is available for your viewing pleasure below.


Melted Space is the ambitious venture forged by French composer Pierre Le Pape. After the outfit's European tour with Symphony X and Myrath, the live lineup of Melted Space decided to reconstruct and remix several songs with vocal contributions from the live crew from the venture. These three new versions have been collected in Remix Remodel, with new track versions as remixed by Beau Hill (producer, Europe, Alice Cooper, Ratt) on "No Need To Fear", After Forever's Joost Van Den Broeck for "Lost Souls From The Other Side", and François-Maxime Boutault (producer, Dagoba, others) for "Titania", with mastering handled at Fascination Street Studio by Tony Lindgren.

You can stream/purchase the entire Remix Remodel EP at this location.