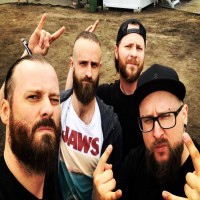 UPDATE: Decapitated were arrested in California, early Saturday on suspicion of kidnapping a woman after their concert in Spokane on August 31st. However, they are now also facing charges of gang-rape. The woman said she was gang-raped by all four members of the Polish death metal band in the bathroom of their tour bus after their concert in Spokane, according to court documents released Monday.

According to the The Spokesman Review, the alleged victim and her friend told Spokane police they attended the August 31st show at The Pin, 412 W. Sprague Ave., and afterward tried to get pictures with the drummer from another band, according to court documents. A security guard told police the show ended at about 11 p.m.

The women said they ended up speaking with members of Decapitated and were invited to have drinks in the tour bus parked outside the venue, according to court documents. One woman "described being excited to be on the bus, and then one of the band members began grabbing her breasts," court documents say. "He was later identified as the drummer, Michal Lysejko."

The same woman "was uncomfortable and said the band members began speaking to each other in Polish," court documents say. "She described the 'vibe' in the bus changed, and one of the members began looking at them like they were prey."

The woman said she looked at her friend "to signal they needed to get out of there." She then used the bathroom and was followed by the lead singer, Piotrowski, according to court documents.

The woman told police Piotrowski began kissing her as she finished using the bathroom, and she began resisting when he started undoing her belt, according to court documents. She said she wanted to leave the bus with her friend, but a band member indicated her friend had already left, saying, "You have to have fun. She left you."

The woman "attempted to push Piotrowski away but he grabbed her arm and spun her around to where she was facing the sink and mirror in the bathroom," court documents say. "She saw in the mirror and out of the corner of her eye each of the band members taking turns raping her."

The friend, meanwhile, said she watched the band members rape the other woman, and Piotrowski asked her to perform oral sex on him. When the friend refused, court documents say, "she was pushed to the ground and received bruises to her knees and shins."

Shortly after leaving the tour bus and driving away, at 12:43 p.m., the friend was pulled over on North Washington Street near West Boone Avenue on suspicion of driving under the influence, according to court documents. In the back seat of a patrol car, the friend was allowed to use her cellphone to call the other woman, who reported the rape. A state trooper said he couldn't help without a specific location and proceeded with his DUI investigation.

Lysejko, the drummer, "made no comment other than he did not know who the girls were" when shown a picture of them. "He said he would not talk without using a translator," court documents say.

Kieltyka, the lead guitarist, told detectives he saw both Piotrowski and Wiecek engaged in a sex acts with the woman in the bathroom. He agreed to have a DNA swab collected as evidence.

Piotrowski "admitted there was a party on the bus and (the women) were present. He then requested an attorney and a translator refusing to make any further statements," court documents say. He declined to give a DNA sample.

Wiecek, the bassist, admitted the women had been on the bus, but said he "sat on the couch and did not see what was going on," court documents say. "He then said he needed a translator so he did not misspeak. He also said no one was forced to get on the bus. He then said he did not recall what happened." Wiecek also declined to give a DNA sample.

A fifth man, Wojciech Cichocki, told detectives he was asleep in the cab of the tour bus and never saw the woman who reported being raped. Cichocki said he "only briefly" saw the friend who was later pulled over. "He also made a reference to (her) Instagram account but would not elaborate on it," court documents say.

All four band members are being held in a Los Angeles County jail facing extradition to Spokane. Police have said additional charges are possible. The Spokane-based attorney representing the band, Steve Graham, said Saturday they would not fight extradition.

Original news, published on 11.09.2017: After releasing the Anticult album via Nuclear Blast Records, Polish metal band Decapitated recently hit the road in the U.S. to support the release alongside Thy Art Is Murder. While the tour is ongoing, Decapitated won't be appearing on any further dates of the trek, with all four members of the band arrested in California this morning.


The Spokesman Review reported the following:

All four members of the Polish death metal band Decapitated were arrested in Santa Ana, California, early Saturday on suspicion of kidnapping a woman after their concert in Spokane on Aug. 31.

A woman reported to police just before 2 a.m. on Sept. 1 the alleged kidnapping by the band members, said Spokane Police Department spokeswoman Cpl. Teresa Fuller. The band had performed with Thy Art is Murder at The Pin concert venue downtown as part of their "Double Homicide" tour. Fuller said she believes the woman attended the heavy metal concert.

The band members were arrested by the Los Angeles County Sheriff's Office after their Friday night concert in Santa Ana. They have been identified as 27-year-old Michael M. Lysejko, 35-year-old Waclaw J. Kieltyka, 31-year-old Rafal T. Piotrowski and 30-year-old Hubert E. Wiecek. All are Polish nationals.

The four are in the Los Angeles County Jail awaiting extradition to Spokane. Fuller said additional charges are possible. The case is still under investigation by the department's Special Victims Unit.

Defense attorney Steve Graham of Spokane said he was hired by the band on Thursday after they became aware of the investigation. "There is another side to this," he said. "We have witnesses that can testify to the fact that the accuser came to visit band of her own free will and left on good terms."

He said he told police that the band members had offered to surrender but never heard anything back. "I made it clear that I could get the guys up here ASAP and they would cooperate," he said.

Graham said he's concerned that they will "languish" in the Los Angeles County Jail for weeks before being returned to Spokane, but said the four will not fight extradition and will return to Spokane willingly.