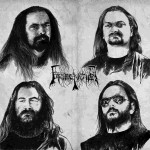 After seven years of silence the seventh album of the Greek death thrashers Obsecration will see the light on 7th of August. Titled Onwards The Mystic Paths Of The Dead, it contains 11 tracks, with the first one streaming below. Produced by Nekys & Obsecration. Mixed and mastered in June (2020) at Priest Diamond Studios.