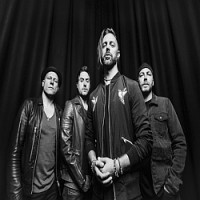 Bullet For My Valentine have released their second single, called "Shatter", from the self-titled album that sees its official release on October 22. The song comes with a brand new video clip. Check it out.