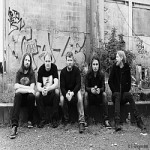 Danish doom lords Altar Of Oblivion are pleased to share a previously unreleased song, called "The Night They Came". The latter was planned to be part of the group's unreleased album, In The Cesspit Of Divine Decay (meant to be released in 2015).


Comments the band: ''As it has been way too long since we last uploaded new material, we hereby introduce you to a track from an album called In The Cesspit Of Divine Decay, which was meant to be released in 2015. However, due to line-up changes, we decided to put it on ice and work on new material instead.

"In The Cesspit Of Divine Decay is a concept album based on the diary of guitarist Martin Meyer Sparvath's great-grandfather, who reluctantly fought for the German Empire in the trenches of WW1.

"Over the past few years, we have been busy completing already recorded material, which has resulted in tight release schedule. Consequently, this album probably won’t see the light of day until late 2022, as the following sonic endeavours will be released first: