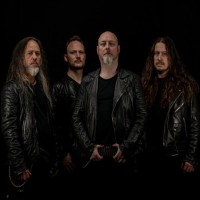 After long 38 years, Dutch death metal formation Thanatos have decided to call it quits. Frontman and original member Stephan Gebédi shared a statement, which can be read below.

Stephan on behalf of Thanatos: "Hey everybody! After 38 years we have decided to put an end to Thanatos. After the 3 upcoming festival shows this Summer, there will be no more studio albums nor live shows! There's many reasons I could give you for this decision but basically all that we wanted to say musically has been said and done. It's been a rough ride with lots of ups and downs, but I'm proud of the fact that we survived all those ups and downs for more than 38 years and also proud of the fact that our last studio album Violent Death Rituals might just be the best album we've ever done. It’s not given to many bands that have been around for such a long time to peak with your final album!

"We want to thank you all for your support and if you want to see the band one final time, we invite you to come and see us at either Alcatraz festival, Belgium (August 14th, very early Sunday show!), UK Deathfest (September 4th, London) or Baroeg Open Air (September 10th) in our home town Rotterdam. We might release some previously unreleased material and/or live recordings in the future so our website (https://thanatos666.bigcartel.com) and Facebook page will remain active to keep the Thanatos legacy alive. We also have a special limited edition 1984-2022 legacy shirt available in our webstore now, inspired by the artwork of our debut album. Thanks again and we hope to see you at one of our final shows! Cheers!"