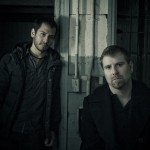 The news was announced a few days ago already, but here's the official word from Seasons Of Mist:

"Season of Mist is really proud to announce that a new cult band just joined the roster. Let's welcome legendary American progressive jazzy death metal band Cynic! Most of the label's team have been a fan of the band's milestone and so far only album, "Focus", so needless to say we at Season of Mist are all extremely excited about this new collaboration. Here's frontman Paul Masvidal's comment about the signing:

"We're pleased to be back in business with Season of Mist as our record company. They have tremendous enthusiasm and passion for our work. Our bottom line was a company that understood what Cynic does and believes in it 100%. We found that with SOM. We're deep in the pre-production album process now and will be headed into the studio in a couple weeks to dive even deeper and start the recordings with our talented friend Warren Riker at the engineering / mixing helm. The journey of writing this record has taken Reinert and I to new heights of exploration, straight into the heart of Cynic's soul. We're thrilled to be able to share this new work with the best fans in the world. Stay tuned."

The release of Cynic's sophomore album, which will be out on Season of Mist fifteen years after "Focus", is set to next autumn. In the meantime, you can check the band's new MySpace profile http://www.myspace.com/cyniconline, on which you can hear an excerpt of the demo to the brand new track "Integral Birth"!

Shaped around founding members Paul Masvidal and Sean Reinert, the new line-up sees the return of bass god Sean Malone and the addition of Dutch guitarist Tymon Kruidenier who will also be in charge of 'death' vocals. The band are set to enter the studio this summer with Grammy Award winning Warren Riker (Down, Santana, etc.) to begin work on their long-awaited follow-up to "Focus". The album will contain eight songs, and the band are working once again with renowned artist Venosa (who created the unmistakeable cover and visuals for "Focus"), and the new album will be preceded by additional live shows, including a special appearance at Wacken Open Air, Germany, on next August 1st."