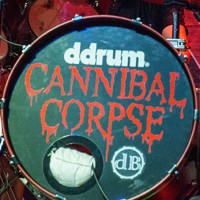 Back at The Fillmore - this time 8bitglitch and I were hunkered down for some death metal. I haven't had the occasion to see many bands more than once so two repeats tonight was a real treat, having seen Aeon and Cannibal Corpse at Summer Slaughters 2013 and 2012, respectively. The strange doppelganger of my ex was in the crowd as usual, so we were ready to begin!

Tribulation was likely formed from a craigslist advert that said, "Seeking Metal Musicians: Must Have Fabulous Hair." These dudes had just brilliant hair. All of them. From the flowing raven locks of the drummer and one guitarist, the tussled blond of the flamboyant other guitarist, to the long, flaxen dreads of the vocalist/bassist; the hair was an entity of its own. The slight use of make-up and styled dark clothing added to their ambiance, plus the music had a nice groove. I'm intrigued to check them out on CD, though they weren't having too much of an effect on the growing audience that particular night. These metalheads came for fast, aggressive music, and Tribulation played more introspective heavy music that, while it did warm up the audience for the most part, it still elicited shouts of "play faster!" between songs.

Each player struck some great poses and they were quite interesting to watch; very dramatic, if a bit low energy. My favorite part was watching the metalheads marching around the mosh pit awaiting the musical permission to let loose and being so often denied. About half of the build ups slowed back down instead of exploding, thus toying with their confused fast-slow-fast march. 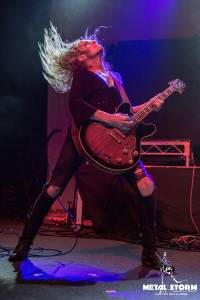 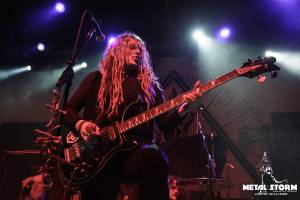 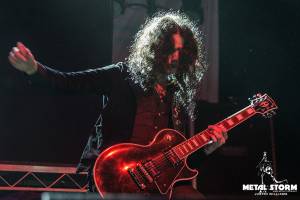 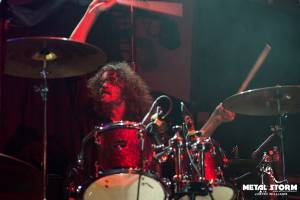 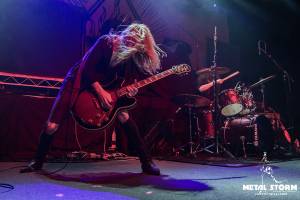 Aeon's "front line" takes the stage, finds their individual spots to stand, then pours cement over their feet. The vocalist only has one foot in cement, allowing the other foot to sometimes prop up on the monitor. That was the extent of their show last time and that is the extent of their show this time. The important thing is, though, they play really great music, thus we all enjoyed the show. The crowd seemed to know their songs and we yelled for and received some great tunes; there was much moshing, crowds-surfing, as well as fists and horns flying. If you love rocking out to your favorite tunes then I'd suggest any fans get out to see Aeon live. Otherwise, just stay home, play the CD, and look at a picture of them standing there.

Both time I've seen them play it was as if they didn't have enough room on stage. That may have been the case with 2013's Summer Slaughter but tonight we just witnessed Tribulation running around the stage making grand poses and they had even less space. Despite all of this, I'd love to see Aeon again. I'll admittedly hold out hope that maybe they'll move around the stage a bit, maybe make contact with each other once or twice, and maybe make a real connection to the audience (I'm talking to you guitarists and bassist; don't just be shoe-gazing statues and rely on your singer to give 4 dudes-worth of performance.) Though, massive props to vocalist Tommy Dahlström for wearing a Revocation tour shirt. 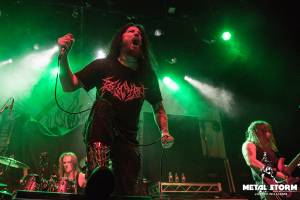 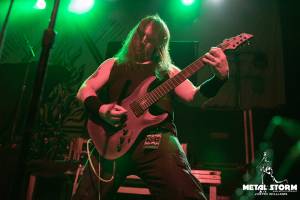 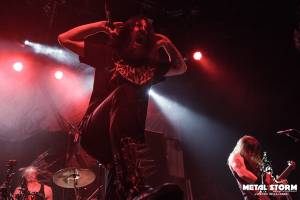 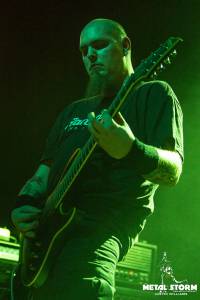 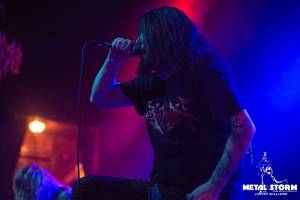 Behold Behemoth. These were not just some dudes playing their music; no, the show had finally begun. Welcome to the theatre, for Behemoth are theatre in the best sense of the word. Stage presence like this is a thing rarely found. Four grown men enter in costumes and make-up and you are completely captivated. Many bands use costumes and make-up and, while it can be tons of fun, it can also be kinda silly. Not Behemoth. Silly? They'll rip your fucking throat out. You take them 100% seriously or they sacrifice you to the beast.

Their stage had the drummer up on a wide metal platform with stairs descending forward on either side. This allowed Nergal and friends to play their flying Vs up front, up top with the drummer, or play on the steps themselves. And play they did, using all of these levels and more, including atop the downstage monitors. They were in near-constant motion but it was not contrived at all. It made the moments even more spooky and captivating when they all stopped to play still. These performers had so much energy and were so engrossing, it was hard to believe they were in the middle of a tour. It felt like a one-off concert; they kept nothing in reserve.

After a completely grand and commanding show, the band leaves the stage, yet returns for an encore. In contrast to their previously active performance, all four men arrive in hooded cloaks with masks and two long, straight horns protruding ominously from their heads. We were in the presence of the beast. After so much superior evil and devilry, I was less sad that I'd missed Watain's show the previous week. 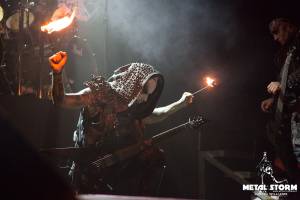 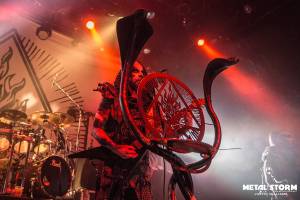 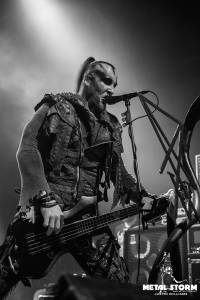 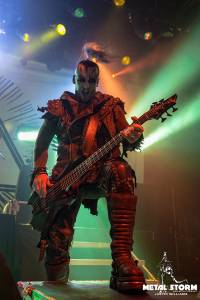 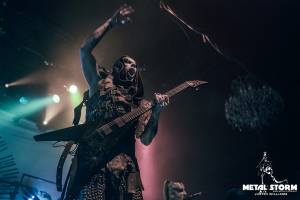 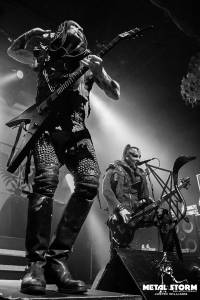 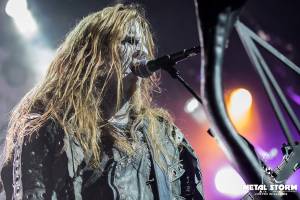 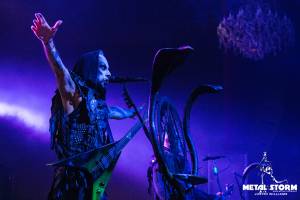 Like Aeon, Cannibal Corpse took the stage, planted their feet, poured the cement, and played a great show. Safe bet that Aeon studies them for performance technique. However, Cannibal Corpse was very different. Yes, they added a bit of synchronized headbanging, which was remarkably effective, but mostly their years of experience as seasoned veterans of death metal shone brightly on that stage. They meant it, every note.

I went upstairs to observe much of Cannibal Corpse's show from the small balcony and am so glad I did: the magic of their performance was truly revealed. What makes them so great live is that people love it so much, and are easily infected by the groove. Seeing the audience from above was like looking through a microscope at a bunch of cells continuously dividing, all wiggly and in constant motion. The sold-out theatre was just packed with kids, elders, and everyone in between getting their groove on. It had all become one giant, friendly mosh-pit, and Cannibal Corpse was the maniacal conductor, the medium by which the crowd was incensed.

Despite primarily standing in one place, they just ooze metal, professionalism, and awesome. They stand there and play better than anyone, perhaps because they've been playing shows since before many of you readers were born. George Fisher, AKA "Corpsegrinder," has this neck that's as thick as his already giant head, and is pretty menacing. It's probably for the best, because he did quite a bit of headbanging. For as long as Cannibal Corpse has been at it, they probably have neck surgeries as often as athletes have knee surgeries.

About 2/3 of the way through, the band takes a brief water break between songs and the crowd is incessantly shouting for their favorites before coalescing to "CAN-NI-BAL!" This moment perfectly summed up the show. If Behemoth was the pinnacle of the evening, Cannibal Corpse was the ideal denouement, allowing everyone to release all remaining aggression and pent up METAL they had within them. We all left tired and satisfied. 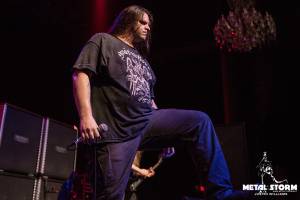 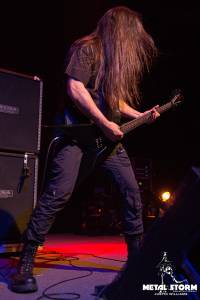 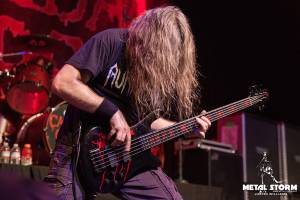 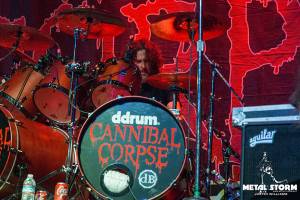 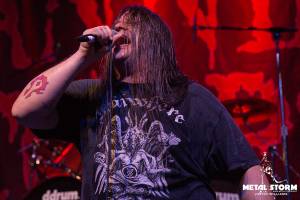 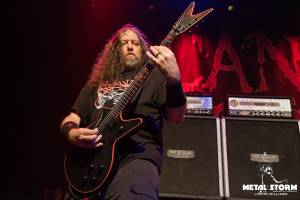 Written on 17.02.2015 by
Susan
Susan appreciates quality metal regardless of sub-genre. Metal Storm Staff since 2006.