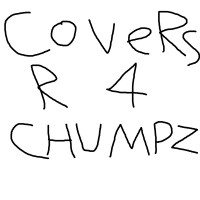 The more I branch out into different forms of content on Metal Storm, the more I realize something: I don't have all that many original ideas myself, but I sure can parrot other people's work like nobody's business. That revelation made my next choice of publication inevitable: my own installment of the covers list thing, so that you may all cower at yet further evidence of my superior tastes. If you think I've missed something, I encourage you to check Dane Train's or BitterCOld's list to see if the song was already featured, and then to voice your concern in a civil manner somewhere else. I've excluded covers of traditional/folk songs, because that opens up a whole new can of worms, but I may devise a separate list in the future. Be advised that this list has no real order.

The 1966 Rolling Stones classic "Paint It Black" must be one of the most-covered rock songs ever written. Everybody and his cousin has a new version of the song and the concept is pretty exhausted at this point, but if you ask me, the guy who did it best was Judas Priest's Glenn Tipton on his unjustly-overlooked 1996 solo album Baptizm Of Fire. Glenn's version may not be as inventive as Rage's, or as creepy as W.A.S.P.'s, or as brutal as Deranged's, or as Ukrainian as Кам'яний гість's, but Glenn's heroic, high-octane re-imagining makes this old classic more memorable and explosive than ever.

System never slacks when it comes to covers. The band's spastic, scattershot cover of Black Sabbath's "Snowblind" and unusual rendering of The Wu-Tang Clan's "Shame" could easily have made this list (at least, if "Snowblind" weren't already a metal song) - but for me, the star on the tree is "The Metro." Berlin's original version was a puffy, technotic curio that felt like part of the soundtrack to a low-budget 1980s sci fi flick, but System completely transformed the song from the metro into a freight train. A rare guitar solo from Daron Malakian and Serj Tankian's versatile, demented vocals help cement this groovy, dramatic, roaring masterpiece as a master class in reinventing songs.

I don't know why metal bands have so heartily embraced the tradition of covering silly pop songs from the 1980s, but you sure won't hear me complaining - especially when the results sound like this. Black Messiah's version translates Dschinghis Khan's stern disco into a ripping black metal anthem that, while heavy, wintry, and raw, retains the catchiness and fun of the original. For songs about Москва, anyway, black metal feels a lot more appropriate than dance music.

Turisas's take on yet another ridiculous piece of ludicrously-choreographed 1980s nostalgia has garnered quite a lot of attention, and for good reason: it's phenomenal. Turisas winds Boney M's hit back a few centuries and introduces the Mad Monk to the world of Varangians, Kievan Rus, and Miklagard, recasting the silly pop chronicle as a wonderfully fun folk metal jaunt that any российский торговец would be proud to sing all the way from Scandinavia to Greece.

I have endless positive things to say about my favorite band, but one of The SLoT's best qualities is its profound aptitude for inventive covers. Not one song covered by the band has escaped without becoming an entirely new work, and the best example is "C'est La Vie." The SLoT turned Naiv's restrained, mid-paced, punky malaise into a dynamic, over-the-top explosion of melody and energy, demonstrating that sometimes a song's creator cannot always unlock the song's true potential. As far as re-imaginings go, "C'est La Vie" is one of the best on this list. Это, действительно, красивая песня.

Alestorm may not have a lot in common with young people's popular music (except when it totally does), but if there's one thing that pirates understand all too well, it's drinking. It's almost creepy how perfectly Alestorm is able to impose its own image on Taio Cruz's ode to the side effects of partying. "Hangover" is, ultimately, one of the best representations of Alestorm's whole shtick: it's hilarious and ridiculous, but made possible by a lot of talent and keen melodic detail. Most importantly, if you ever wanted to hear a pirate rap…

Megadeth need not apply; the award for best Sex Pistols cover goes to Overkill. Overkill has always had an ear for solid punk covers, having once been a punk band itself, and this cover plays raw, fast, and heavy without losing the electric rock'n'roll discharge of the original. What pushes this cover into the realms of legend, though, is Bobby "Blitz" Ellsworth's performance. Blitz shrieks and screams his lungs out to such a bloody and merciless extent that he sounds inhuman, making "No Feelings" one of Overkill's most violent recordings in a long history of neck-wreckers.

Despite the fact that it's positioned at #8, Melt-Banana's scorching, noise-plastering missile strike of a Damned rendition is almost certainly my favorite cover of all time (I said there was no order to this list). Contained within these 102 seconds are all the things I love about Melt-Banana - Yako Onuki's unmistakable Kirby vocals, Ichirou Agata's searing, feedback-laden guitar, Rika Hamamoto's punchy, frenetic bass, and programmed drums that fall all over themselves in pushing the song ever faster. The Damned's original is one of my favorite punk songs, but Melt-Banana's wild, distorted, explosive joyride through noisy unorthodoxy uncovers a whole new musical world.

I consider Pink Floyd's Wish You Were Here one of the best rock albums ever recorded. I have listened to that album literally hundreds of times. I have probably spent more time in my life listening to the original version of "Welcome to the Machine" than I have doing math homework, and that's serious business, because I suck at math. Naturally, I have a strong response to covers of those four precious songs, but prog maestro Arjen knocked this one out of the park. His version is grinding, metallic, and creepy in a whole new way without completely departing from the hazy, depressed mood of the original. I hear the mechanical chunk and thud of those guitars in my sleep.

Children Of Bodom is known for its extensive catalogue of covers, some of which are definitely better than others, and some of which take the piss as much as creative liberties. Of Bodom's many covers, the one that stands out the most is not the infamous "Oops, I Did It Again," but the old Creedence Clearwater Revival classic "Lookin' Out My Backdoor." You don't have to think too hard to get a sense for how silly Bodom's version is, but it's rollicking good fun with some blazing instrumental work that somehow manages to both legitimately impress and contribute to how absurdly over-charged the song has become. This is also one of the few metal songs I can name with a banjo solo.

BONUS: This is a list of ten covers, and ten metal covers at that, but it's also my list, so what I say goes. The Meads Of Asphodel's twisted damning of the classic, feel-good "What A Wonderful World" is as hilarious as it is realistic. Metatron's disgusting, ragged voice isn't actually too far off from Louis Armstrong's singing style, and the Meads' trademark lecherous, slimy delivery makes the whole song a supremely uncomfortable experience. It's beautiful.