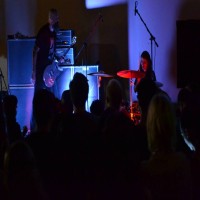 I hope you didn't shed too many tears or pop any blood vessels in your wait for the next installation of South Florida Swampventures, but in case you did it's time to exhale, comrade. Weeeee're baaaaaack!

Ah, Miami, Florida. Quite the leap from my neighborhood of Lake Worth that was covered in the previous article. As noted before, South Florida has had a notorious reputation over the years for being something of an "outlaw's paradise," but if there's one city that's the epitome of this, it's unquestionably Miami. If you know your Florida history, you'd know that Miami is almost like a state within a state, having a crazier, more violent, and all around more unpredictable atmosphere than perhaps anywhere else in the state. In the 80s with the rise of the underground cocaine networks, the city was almost like a state within a state, ruled by ruthless drug lords who bought off police, judges, and even politicians in efforts to evade prosecution and enforce their own rule. The legendary gangster Al Capone even had a house in Miami in the early 1900s, and paid railway pioneer Henry Flagler several visits in his efforts to persuade the latter to smuggle alcohol up to Chicago via train during Prohibition. I can guarantee you, from personal experience, that these "anything goes" type precedents have left a powerful, present day impact on Miami.

History lessons aside, the evening of June 23 brought me to Gramps, a personal Miami favorite. I really can't stress enough how much I love this place and how much I wish it was closer to home. After walking through the main entrance on the street, you're greeted by a large patio area with a stage at the forefront. Whether this stage is utilized for bands or not usually depends on the show and the notoriety of the band. It was local metallers on deck tonight, so this stage got used for a DJ playing bootyshaking pop jamz for the nonbelievers (ewww), while the heavies I came out for played on a stage in a room directly to the left of the main stage. Meanwhile, in the patio area, there's a lovely stand serving refreshments that would make Ponce de Leon think he'd found the Fountain of Youth, as well as another that serves some mindfuckingly good pizza. Put simply, it's a very cozy, accommodating venue that knows how to keep its attendees comfortable before a show starts, or between different sets.

This evening it was four little known, but highly potent local bands that dragged me away from Netflix and sci fi comics for a 3 hour round trip from my home turf. I wouldn't regret it. 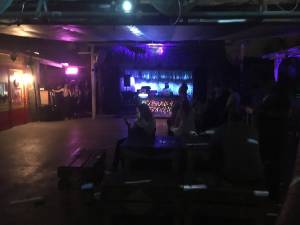 Things started out this evening with a favorite of mine, the deranged, psychedelically-tinged death metal of Orbweaver. This band is actually the brainchild of ex Gigan frontman Randy Piro, and being blunt, I find them far more dynamic and engaging than what Gigan have done, whether recently or even when Randy was still in the band. Up til this point Randy had been both a guitarist and vocalist for the band, but Orbweaver surprised us with this set, as it was their first with a new vocalist, Randy now content to solely handle guitar responsibilities. In the tiny but intimate setting of the venue's side stage room, we were plunged into a hazy whirlwind of groovy, dissonant death metal riffage, complete with spaced out contributions from guitar and bass to evoke a dreamlike, Lovecraftian sci fi mood. It's always a blast watching an Orbweaver set because every member is extremely talented at what they do, and it's not the type of set where anyone really overshadows anyone else performance-wise. New Guy did a pretty great job stepping up to Randy's formal vocal duty, but I did find myself laughing internally a lot at his various poses while holding the mic, most of which were pretty deathcore-ish. 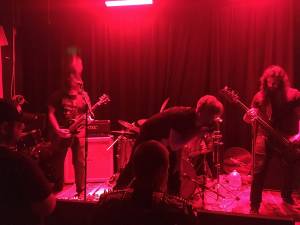 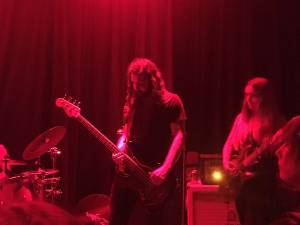 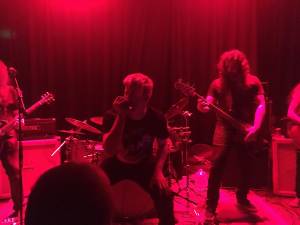 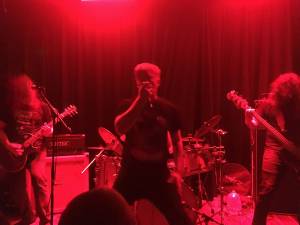 Yashira were the only band on the lineup that I hadn't had any previous encounters with, and I decided to go into their set blind with no prior listening just to see how things would play out. I ended up being glad I did, as I was in for a pleasant surprise. This four piece from Jacksonville employ a sound that's a bit difficult to describe, basically a violent yet melodic fusion of sludge, hardcore, and various types of extreme metal. The music definitely stuck, hard hitting, catchy, and easy to get into, and was enjoyable from multiple perspectives. Sometimes it'd be more sludgey grooves to just rhythmically bob your head to, and at other points things would pick up tempo and approach realms more resemblant of black and death metal, albeit a just as catchy and memorable brand. Whether employing one approach or the other, Yashira definitely piqued my interest, and I'll be keeping an eye out for whatever material they might happen to release onto an innocent, unsuspecting audience in the future. 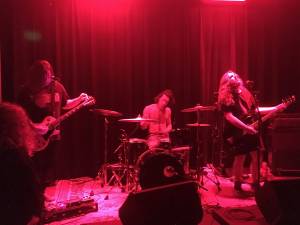 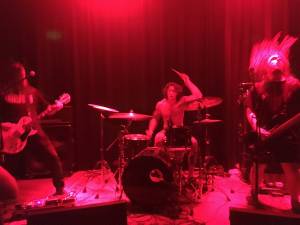 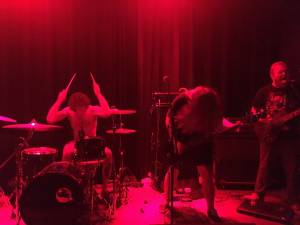 Find yourself in the grief of others right here.

I was really looking forward to this set. I actually saw Set And Setting back in 2014 in Tampa, Florida, as part of this day long "Southern Darkness Festival" thing, but back then I had no idea who they were and they didn't leave much of an impression on me. But now, having gone deeper into more atmospheric brands of metal, my anticipation for them was pretty high. From Saint Petersburg, Set And Setting are an instrumental post metal band, but they stand out a lot from the rest of the pack with how their compositions also contain considerable traces of sludge, black metal, and psychedelic influences. Most of their set consisted of songs from the Reflectionless album they put out earlier this year, which was nice, because since I had listened to that album a lot, I recognized a lot of moments from it and was able to enjoy the music on a much deeper, more intimate level in a live setting. With all members but the drummers choosing to play off stage, in the middle of the crowd, the jam-like tunes from Set And Setting were ensnaring, relaxing, and left a powerful impression. At this point I could have left Gramps perfectly satisfied for the evening, but there was still one final course on the menu. 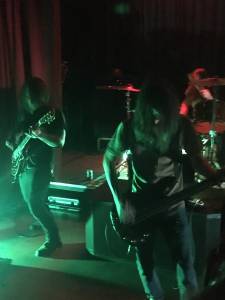 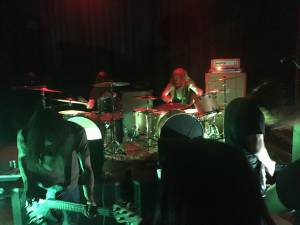 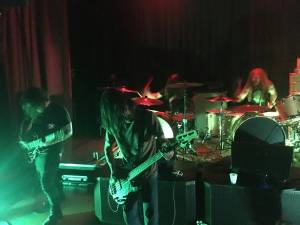 I was confused a bit when Set And Setting turned out to not be the final band of the evening, as the flyer for the show had listed them last, as if they were the headliner, but this ended up not being the case. Instead, local favorites Holly Hunt got the honor of closing things out. This duo, also instrumental, is composed solely of guitarist Gavin Perry and drummer Beatriz Monteavaro. It would be best to compare them to Earth around the time of their Earth 2 debut: colossal, repetitive, and trance-like drone doom. No cilantro or lime juice or any other special flavoring, just meat and potatoes drums and riffs. The band tends to have an amusing sense of anti authority political humor that they display every time I see them, and this wasn't absent this evening, as a huge RESIST had been painted onto one of Gavin's speakers (this is considerably more tame than usual, a previous show last year had MURDER TRUMP displayed proudly). The set went as it usually does, steady, engaging, and hypnotizing in its stripped down simplicity. Having seen a few drone bands live now, such as Bong and Dark Buddha Rising, it conjured some feelings of those experiences, perhaps not necessarily of those bands' caliber, but still quite daze-inducing and otherwordly. 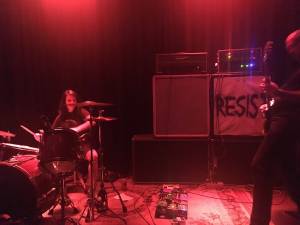 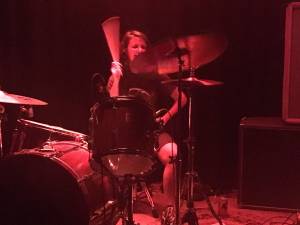 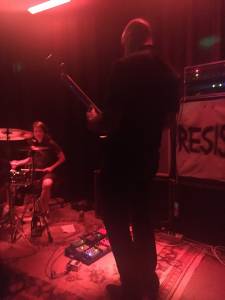 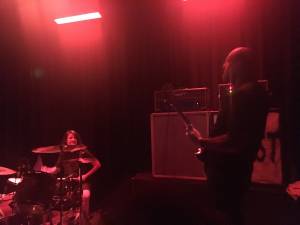 Time travel back to 1993 with Dylan Carlson's evil twin here.

THAT PART THAT COMES AFTER

Due to traveling expenses and the simple fact that the city is just crazy as all hell (particularly its drivers), I don't pay visits to Miami for shows as frequently as I used to, reserving such visits more for must see national or foreign bands than for locals. However this evening the locals in question who were performing were simply so good that I couldn't say no. It had been quite a while since I'd seen the likes of Orbweaver, Set And Setting, and Holly Hunt live, and I won a new interest with Yashira as well. Overall it was a great night that made me happy to be involved in the Florida metal scene that, although overflowing with ridiculously overhyped thrash and death metal bands, does still have a good number of gems lurking here and there.

Stay tuned for more swampventures and check out the gallery in the meantime. There's a picture in there of someone riding an alligator in the street that I snapped on my way to the venue.

Written on 16.07.2017 by
Apothecary
Comforting the disturbed and disturbing the comfortable since 2013.
More articles by Apothecary ››