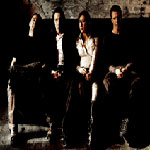 +Can you introduce Elvaron in a few words, who does what, who composes and so forth ?

Right now, the band is composed by Nicolas Colnot on bass guitar, who is also our full-time choir singer, then there is Fred Renaut on drums and myself, Matthieu Morand on guitars and lead vocals. The keyboard player position quitted by SeeK in September 2003 is still vacant! So far, only Nico and I are composing. SeeK was one of the main compositors. However, the position is open and we are already talking about an handful of ideas with Fred in view of a fourth album [the third one is already entirely composed].

+"The Five Shires" seems to be a concept album. What is the story told on this record?

It's in fact the follow-up of "Mages Battle". A little reminder, at the end of "Mages Battle", the tribes of the world of Krynn are enslaved or killed by the powerful mage Raistlin. In "The Five Shires", a small group of adventurers seeks Raistlin with the goal to destroy him. To achieve that, they must travel through the five shires that form this world [hence the name of the album] and they must go to Palanthas tower, where Raistlin reigns. But our adventurers are not aware of the fact that Raistlin has the ability to travel in a parallel world called Ravenland. In this land, which is already under Raistlin domination, his name is Alifaar. His goal is to awake an almighty demon. The gathering of the mages from Ravenland send two warriors to seek Raistlin/Alifaar. All of these characters, the two warriors from Ravenland and our three adventurers from Krynn, will meet in the song 'The Call Of The Black Dragon'. The story will continue in our third album.

As you can see, it's somewhat of an adaptation from the Dragonlance cycle from authors Weiss & Hickmann. I also get inspired by a novel written by SeeK called 'L'Alliance du Dragon Noir' [The Alliance of the Black Dragon].

+Why did you work again on the "The Five Shires"? Can you explain how such an idea came, tell us more about the line-up change.

I have to say that we were expecting that question. This is mainly due to several circumstances happening at the same time. A new line-up with Nico, the 10 year anniversary of the band, album out of stock, new recording hardware and a very mediocre production on the first edition. We were in the middle of the pre-production for our third album when we decided to re-record "The Five Shires" entirely. I must say that everything, yes everything, had to be recorded again. And then the idea to include this bonus disc came. All of these events gave us the will to write a new song that we thought was well done composition-wise. Also it gives Elvaron a chance to remain in the news while waiting for our next album, expected beginning 2005.
For the line-up change, it's easy. Julien left the band because Elvaron wasn't giving him enough satisfaction anymore. Nico is a long time friend of mine, fan of the band and an excellent musician and compositor. We begged him to join us and he accepted!


+You have all attended musical schools, what are the advantages for a metal band?

Well, the advantages are numerous. For composition, harmony lessons totally changed our way to write music. Classical music remains the elementary base of our music. The rigorous way to perform the songs comes from our instruments classes at the Conservatory. As Patrick Rondat rightly says, there will always be a difference between those who do things by choice or by fear. The fact to know the music theory, to be able to read and write music is why we know why we choose to play a particular note and not another. We feel closer to classical compositors than nowadays music songwriters.


+If I'm correct, I heard that "The Call Of The Black Dragon" is a pre-work of the musical style for the next album. What can you unveil about that?

It will be very progressive. The titles will be longer with a lot of instrumental moments. We emphasized the keyboard parts and the atmospheres. The work on the vocals will be very important, especially the backups. It will be musically more violent. That's what I can say about it so far.

+What are your inspiration sources? Bands or other…

I believe that life itself influences our writing process all the time. The exercise of reflexive composition, unconsciously, our states of mind, I guess. Lastly, bands such as Evergrey and Nevermore really impressed me because they represent the new wave of music I enjoy. Reading also represents an endless inspiration source. Movies is also to be cited. Every form of art in fact! We are absolutely against TV that is supposed to be more and more "educative" instead of being "informative and entertaining". We are told what to eat, what to drink, what to listen, what to watch in order to be conformist. With Nico, we have a large project of massive destruction of satellites, those in charge of broadcasting TV channels. It's about time people take the power back on their own minds and on their own choices.

+Do you already have concerts or a tour scheduled? [Go ahead, make your promo ;-)]

We are due to make a specific appearance this summer. We are scheduled in a classical music festival: "les Nancyphonies". It will be in Nancy on July 23rd 2004 at 9PM at the "cour de la manufacture". We are playing in the program "Classic'off"; days dedicated to nowadays worldwide music. Apart from that, we are mainly focused on the production of our third album.

+What are the best touring memories ? With who did you enjoy performing, with who would you like to play?

The opening gig for Blaze was a great moment, a huge memory! We really enjoyed playing with the Time Curve Symmetry, who are both musically and personally at the top. We would like to play with Dream Theater… Hope they get this message…

+Nothing to do with music but which movies or books really impressed you guys? [I suppose I might encounter some Fantasy titles, also it surely influences your songs…]


+Thanks for anwering all these questions : ) a last word for your fans?

My signature, my motto… I know my copy-pastes are going to be visible but I can resist ;-) Don't let yourself being blinded by the media… Today Evanescence… and tomorrow Christina Aguilera? Stop buy music as if it is Danette® from Dannon®. Go back to your disc shop, listen, discover, socialize yourself and renew the dialogue with metal heads, remember your audiotapes exchange in school, go see some concerts, read the book of Fabien Hein, stop emulation, turn off your computers.