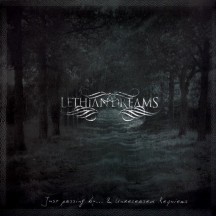 
Lethian Dreams is the brain child of Matthieu Sachs and Carline Van Roos. They were formed somewhere around 2002 in France and ever since they tend to adorn the world of atmospheric/melodic doom metal with consistent works. Their first full-length, Bleak Silver Streams, was released during 2009 and left a very good impression for what it was preserving. Despite neither being that personal in terms of sound nor playing something you've never heard before, their fragile art was well-conceived and straight from the heart.

After two years of silence they managed to remind to the atmospheric/melodic doom metal audience that they're still around and released a compilation, Just Passing By... & Unreleased Requiems. This album consists of 10 compositions of which the first four are previously unreleased and were composed during the 2005-2010 era of the band. This first part of the album follows the more ethereal/atmospheric aspect of the band, elements of which can be found both on their first full-length, but also on their 2012 release, Season Of Raven Words, and a more ethereal/neoclassical side-project of Carline, Aythis. As for the six remaining compositions, they are re-mastered versions of their 2006 demo Requiem For My Soul, Eternal Rest For My Heart which later on became their debut album, with differences though. Melody and ambiance still are the main factors of these songs as they blend with the bereaving world of doom metal, having a more doom/"death" oriented reference at times, however don't expect much. Expect a bit of Anathema, a bit of Saturnus, a bit of ethereal, a bit of "this" and a bit of "that" which forge a generic idea of what to expect in general.

Concluding, Just Passing By... & Unreleased Requiems refers to fans of the band since it gives them the chance to cherish some unreleased compositions and a primary, different face of their debut. Yet still, it could give a glimpse of the band to someone that doesn't know them and would like to find out what Lethian Dreams are all about. In this case, it's not a must, it could be a pleasant should.

Written on 04.04.2012 by
KwonVerge
"It is myself I have never met, whose face is pasted on the underside of my mind."
More reviews by KwonVerge ››