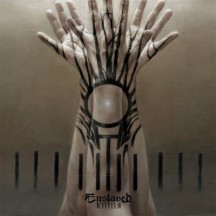 
From Viking-tinged black metal band to progressive super-heavyweights, Enslaved have constantly evolved with each release. RIITIIR continues the path of progression as it tackles the near-impossible task of following on from their 2010 masterpiece.

A mightily chunky riff leads us into the album at a steady pace, but it isn't long before the latest evolutionary step becomes apparent in the form of longer, more dynamic, more progressive psalms of extreme metal. RIITIIR is epic. Enslaved own the ambience with their hypnotic, landscaping riffs and excellent musicianship; be it an amazing, well-placed guitar solo or contrasting harsh and clean vocals. RIITIIR is an album to become truly absorbed into with such depth and fine detail on offer; in these progressive aspects the band have out-done themselves once more.

The album is so dense however, that RIITIIR is not an album that can be easily enjoyed to its fullest potential. The album is not as initially captivating as Axioma Ethica Odini, and can at first feel a little estranged or even alienating as it meanders from hymn to hymn. Enslaved have really thought outside of the box with this one, resulting in an album that is initially a challenge to digest - but given time does become clear.

RIITIIR has so many layers to explore, perhaps intimidatingly so at first, but once the layers begin to unravel we are presented with an amazingly dynamic, sonic experience well worth the time. The nature of RIITIIR might not make it as readily apparent, but it is as equally enthralling as the previous album with far more depth and detail. Perhaps alienating to some, but in this progressive vein Enslaved have become one of the finest talents, if not the finest in the field.

Unfathomably the band have created another majestic artwork of music. This one might take a little more time to digest and understand, but the evolution of Enslaved continues only into wonderful places.