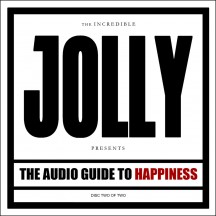 
Ah, this double album's really been a breath of fresh air for me, and I'm sure it can be the same for many melodic prog fans. Two years after the release of The Audio Guide To Happiness - Part 1 (click here for the review), New York-based progressive rising stars Jolly strike back with the Disc 2 of 2, that is the guide's final chapter.

This album wasn't initially meant to be released so late, it should in fact have followed sooner after Part 1, but the band had some drawbacks, both economic and climatic. It seems, in fact, that drummer Louis Abramson's house, in which the Part 2 was being completed and videos were in the filming process, had been struck by hurricane Sandy.

The first feature to notice is that this album follows exactly the same scheme as its predecessor: two interludes, "Guidance Three" and "Guidance Four", positioned one at the beginning, the other in the middle of the album, introduce to different parts of the album. Listening to them, I couldn't help recalling "Scene One: Regression", introduction to Dream Theater's Metropolis Pt. 2: they both have the feeling to bring peace and relaxation, it's a shame that they don't lead to equal masterpieces. But Jolly's last work doesn't disfigure at all, in front of those prog monsters.

This album suddenly shows to be the hardest of the two to get into, this being caused also by some kinda alienating melodies, as the ones in "Aqualand And The Seven Suns". It's more intricate, deeper, also heavier in sound, but certainly also more mature, even if Part 1 was everything but half-baked. Examples of this "hardening" are "Firewell", in which talented singer Anadale provides previously unused - and damn enjoyable and interesting - harsh vocals, and "Dust Nation Bleak", with a clearly Meshuggah-inspired intro.

So, this could initially be the lower one in an hypothetical preference list among the two parts of the guide (and the debut, the also pretty cool Forty-Six Minutes, Twelve Seconds Of Music), but in the long run, with careful and accurate listens, it has higher chances to conquer your favour.

And, obviously, to make you feel happy.

Written on 26.06.2013 by
R Lewis
Hopefully you won't agree with me, diversity of opinions is what makes metal so beautiful and varied.