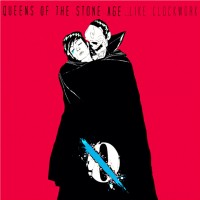 
When I heard that Josh Homme was back in the studio together with the old team (Dave Grohl on drums and bassist Nick Oliveri) it meant not only a return of Queens Of the Stone Age to the scene, but also a return to their roots. ... Like Clockwise still only partly rests on the origin, and that's the heavy drum, wicked riffs and enormous energy that radiate from the numbers of this new album, which, on the other hand, have never been "propulsive" or "smooth".

Some of its basic characteristics are the bare but powerful riffs combined with analog synths and keyboards which in both cases pay homage to the seventies, and today they are even more pronounced in Queens Of The Stone Age. "Keep Your Eyes Peeled" opens the album with experimental "noise" riffs, bass, anxious atmosphere and rolling motion like that of early Black Sabbath and with vocals and melody that could easily find a mate in Cream's Disraeli Gears or Wheels Of Fire. Patented changes of pace and sudden acceleration with polyphony (with the participation of Jake Shears of Scissor Sisters) also have their roots in proto-prog rock of late sixties, but Homme and the band are still outrageously fresh in this redefinition of hard rock.

This is even more evident in "I Sat By The Ocean", with a bass figure of power-pop and the guitar which is in line of Clapton - Harrison stylization and the almost pop tune. "The Vampyre Of Time And Memory" is a great piano ballad along the lines of the seventies, but with fascinating guitar accents and "If I Had A Tail" is a racial piece of pop with glam and Mark Lanegan as a major aromatic addition. "My God Is The Sun" begins like energetic rapids and develops into a number with all the virulent features of "classic" Queens Of The Stone Age and their "desert rock." "Kalopsia" is like "The Vampyre Of Time And Memory" ballad, which spreads with melancholy and romantic atmosphere with instant changes and moves of mighty guitar. It is a "pumped" number in chorus, and again is stopped and slowed down like a boat that suddenly rushed out from the calm. "Fairweather Friends " has a Queen like vocal intro followed first by guitar stumbles, then calm before the new changes of rhythm and guitar crescendo.

As guests of the topic, Lanegan and Elton John provide background vocal roles and they and the piano give special color to the guitar basic theme with excellent unison passages. "Smooth Sailing" is an unexpected entry into the sexy groove with rhythmic background that would be great litter for Prince, and "I Appear Missing" introduces new grand themes in the portfolio of Homme. With Led Zeppelin chord progressions based on the blues, great atmosphere and the guitar it is a new classic. Concluding and main album's theme re-opened the piano with great vocals and bass parts and atmosphere that are patented by Pink Floyd in their furious easy beats. ... Like Clockwork is another great album for Queens Of The Stone Age and, like I said, an out of time hard rock (or simply rock) album that happily reflects both past and present. And that is, of course, always the future!