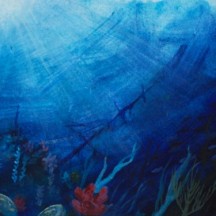 "Don't talk to me about naval tradition. It's nothing but rum, sodomy and the lash."
- Winston Churchill

Shtack is one of the finest expression of what is now commonly defined as pirate metal. This, anyway, shouldn't lead anyone to think this as an Alestorm or Swashbuckle unoriginal imitator, since these Dutch guys play a raw, extreme folk metal, that sometimes flows into a crazy melodeath circus.

The first impression that Shatck offers the listener is that of an album which really embodies the spirit of the pirate tradition: you will hear sabers being unsheathed and bottles of rum being smashed to the ground. The atmosphere is so well recreated because the band is not forcedly trying to do that - it comes spontaneously, like from an old Pandora's box, hidden deep inside their minds, that's been finally unlocked and releases its insanity all at the same time.

The rolling of the privateer and the uncontrolled shouting of the crew are surrounded by captivating folky tunes, that serve as melodic background to that kind of harsh screaming that makes suddenly seem Alestorm as unexperienced kids trying to idealize what's actually been a cruel and wild period.

The feature of Shtack that will stick in your mind is however, its unique lightheartedness and reasoned absurdity, that makes of this one of the future manifestos of freedom and ingenious unpredictability.

Additionally, you'll surely know that I have no use for like harsh vocals, because one of the main things I look for in music is fun. Well, but if you're searching for playfulness too, this album has insignificant chances to let you down: Shtack is an album made by friends for friends, and spreads his high-spiritedness from every note.

To conclude, Shtack is a dangerously funny and meticulously worked on album: do not dare letting it pass under your radar, since it is the typical release that's both useful for boozing with friends and to scratch out a bad day. The guys in the band are already working on their second release: at times like this, it is appropriate to say that the Flying Dutchman is back in forces.

Written on 27.12.2013 by
R Lewis
Hopefully you won't agree with me, diversity of opinions is what makes metal so beautiful and varied.