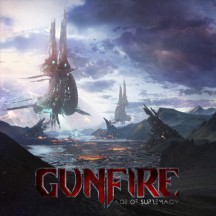 
Gunfire's first new music in ten years brings all the classic metal you could ever need.

As if Gunfire had just woken up from a 25-years coma, Age Of Supremacy gives clean and powerful 80's heavy metal a modern spin: Roberto Borrelli's iconic and slightly operatic vocals lead the way, flanked by steadfast riffing and engaging, though not too fast, rhythms, providing an experience as concrete as that from the long gone years that inspired it.

What the Italian five-some manage to do successfully with Age Of Supremacy is blending the many influences received - US power metal a la Iced Earth, classic NWOBHM such as Saxon or Iron Maiden, progressive nuances and Italian melodic power - in an absolutely dense and rather personal sound.

What they didn't do, though, is make the album enjoyable as a whole. The progressive touch justifies the long tracks (there are nearly no songs under 5 minutes, and four exceed the 8), but it isn't developed enough to keep the listener focused through these prolonged listens. Yet, this wouldn't be such an issue if there were noticeable style changes between a song and the other, to bring freshness. Things not being like that, the album risks to mislay too soon its feeling of retro novelty, and loses many of the features that would allow it to be replayed many times after the first listen.

Yet, some of the longer tracks, such as the two suites that reach double-digits in playing time, though sounding sometimes too stale and stretched just to convey an atmosphere, manage to reach their goal: the whole album sounds big and epic. Not the Rhapsody Of Fire way, but the 80's one.

Considering that this can be seen as a new debut for the band, that need to make themselves a name in the difficult and overcrowded Italian melodic metal scene, maybe a less ambitious and more immediate album would have been more helpful, but yet, if this is Gunfire's sound, there's no point in betraying it just to get noticed. If that had been the main goal, they wouldn't have restarted releasing metal albums.

With all the blemishes listed above, two fundamental things need to be given to Age Of Supremacy: it's passionate, and it's authentic.

Written on 18.09.2014 by
R Lewis
Hopefully you won't agree with me, diversity of opinions is what makes metal so beautiful and varied.