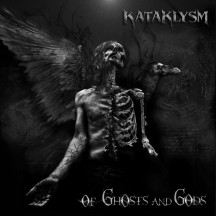 
Kataklysm is surely one of the constants in death metal: releasing an album every few years, maintaining their line-up for almost two decades and only changing on the drums, and being a guarantee for some quality music. With their latest release, Waiting For The End To Come, they let some dynamics return to the otherwise so heavy style, and that was pretty refreshing overall. Now it's time to prove that they can hold onto that path. Of Ghosts And Gods is here to please all fans of their latest stuff.

The 45 minute work consists of ten Kataklysm trademark songs that pick up where Waiting For The End To Come left. A mixture of the well-known heavy-slow riffs and the new dynamic-fast style comes together to form what looks like the new masterplan. The new drummer seems to fit in perfectly and the single guitar concept is working fine as always, thanks to the skills of bassist Stephane Barbe, who plays a full support role that leaves no wishes unfulfilled. Vocals of Maurizio Iacono still claim to be one of the best within the genre, this time using his growl style almost exclusively, save on the glorious hymn "Hate Spirit". While we're at it, a note on production: on first thought there seems to be less power within the vocals than on former albums, but after some tracks it seems to be an issue of the mix that favors the other instruments, probably due to the more melodic style now.

Of Ghosts And Gods starts off with one of the best tracks on it, namely the opener "Breaching The Asylum". Though some might argue that the chorus is somewhat generic, in the second half there lies a part with 38 of the best seconds this band has released for some years. It somehow feels like a vocal solo but go find out for yourself. The next songs carry on with some more or less spectacular moments, while it should be pointed out that "Vindication" shows just how great a faster style fits to all the members. However, on the last track "The World Is A Dying Insect" they go full melodic, resembling Dark Tranquillity in the beginning and some rough Insomnium later on.

Kataklysm leave us another quality release, heading in the right direction without losing their roots. Although there is nothing revolutionary in it, Of Ghosts And Gods is a pretty good output that deserves recognition and will satisfy most headbangers and fans from old and new times. If this style carries on for some more years I predict a golden future for the band.