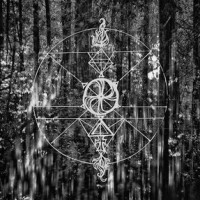 
Primal Gnosis is set around a campfire; there are two basses, drums, a moog and some substances. The campfire is one of those which you slowly dance around trying to evoke the spirit of Satan. That's the picture that arises after the first minutes of listening to Primal Gnosis.

Horse Latitudes's Black Soil from 2013 was a ritualistic and primitive album and the same can be said about Primal Gnosis. The bass and drums had the same primal effect on the listener, and the slow tempo and the simple bass riffs were ritualistic and psychedelic. But we can assume that the Finns thought that they didn't accomplish what they wanted - luring out the devil. When the Finns returned, they did so with another primitive album, but the simplicity from Black Soil has been substituted for more complexity. The tempo and the drums and bass are still slow and repetitive, but within that primitiveness there are more tempo changes within the repetitiveness, making their new release more interesting and esoteric than what they have released before.

Primal Gnosis also seems more improvised, as if the band is evaluating the effect of their music while playing it - is the devil showing himself? Harris's vocals seem to be given to him in the actual moment of recording as he growls, screams and shouts to conjure what the band is set for, even further underlining the psychedelic ritual that this album is. Besides the growls and screams, Harris's stellar cleans create some of the most soul-crushing moments on the album.

There is a bit of genre mixture on the album, and the band seems to play whatever works for them - punk, drone, black metal - but the core of the music is doom. That's a mixture of genres that works well until the last track of the album. I wouldnt mind giving a 10 to Primal Gnosis, as the band has created a unique but also soul-crushing sound, if it weren't for that fifth track where the tempo slows down to almost funeral doom. An evoking ritual is never sad, and neither is Primal Gnosis, but the last song of the album drags on as if the ritual has become a funeral. The tempo is lowered almost as if in resignation that they couldn't evoke the devil.