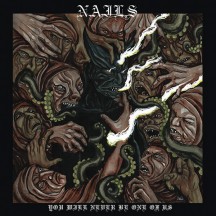 Except one thing. You'd think spending months in Canada would have calmed my nerves a bit - and you'd be right - but no amount of "sorry"s could prepare me for the day these guys announce a hiatus. A couple of months after giving birth to a new album, a few weeks before the scheduled tour date I was going to attend. Especially when this third release delivers at least as much as you'd expect it to.

Before saying anything else, I want to bring your attention to the fact that this now well-recognised band barely has a full hour of material to their name. Let me explain: their longest album to date, namely this one, You Will Never Be One Of Us, is about twenty-two minutes long. Who the hell needs more than twenty minutes of Nails anyway? No one, on the grounds that:

1 - Five seconds into this and you're already adding them to your Metal Storm list of darling musical outfits.
2 - How deaf and/or masochistic do you have to be?

Which brings me to the next point: multiple listens of You Will Never Be One Of Us do not make a reviewer's job easier. It is so dense and short that you barely have time to write a couple of sentences. A few hours into it being on repeat feels similar to having spent five years in Gitmo: you come out broken and some of your relatives have died. At least you start appreciating the little things, like silence and not being waterboarded. The reason is simple: the insane mix of grind and hardcore punk is just as efficient as ever - from what my battered mind can gather. Without wanting to further sound like a complete fraud of a "critic" - which I totally am - it does seem as though some of the death metal influences on this opus are less noticeable than in previous works.The whole affair sounds a little less methodical in the way the trio goes on about making you love/hate yourself/humans/life/music/everything. Someone with an accustomed ear could also detect a murkier sound, as well as a heavier reliance on rhythm and pure energy - rather than on structure. Clustering all these fleeting perceptions together, you could infer that compared to its two predecessors albums, this new offering appears a tad lighter. To which I would retort that any difference you might notice in the levels of heaviness remains minimal, for this shit be real heavy regardless.

I am aware of how nebulous all this sounds, I always have a bit of a problem being purely descriptive and/or technical when it comes to good grindcore. So I will quickly summarise/illustrate the above blabber: Nails plays one of the most violent and compact blends of grind to which I've had the pleasure to be exposed, they released a third album that's just as well-written and -executed as the others, albeit slightly different in its atmosphere. It's equivalent to choosing between three different guns to shoot yourself in the head with: same result, but there will be an insignificant difference in the amount of work required for the person who has to clean that up. So you can go ahead, there's no bad place to start - or end, depends on your outlook. Listen to this baby right here.


Nails, please come back. And not just "sort of".