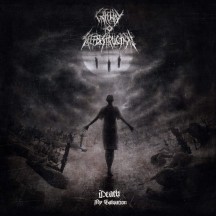 
I knew I made a good decision when I picked this up from Northern Silence Productions and a bad decision when I slept on it for three months. On the surface, and, indeed, to a great extent beneath that, Gateway To Selfdestruction is another friendly neighborhood black metal band, but this debut release executes its mission with such creativity and spirit that it should not be overlooked.

Many tracks, the opener included, combine early '90s black metal production with mid-'90s alt rock melodies, and by mid-'90s alt rock, I mean either Katatonia or The Cranberries. I could actually be talking about Deafheaven. I'm indiscriminate. Regardless of where the inspiration lies, Gateway To Selfdestruction cultivates a melodic melancholia not typically observed in the wild among black metal bands; this group doesn't sound much like doom, but certainly like a band that has listened to doom before. Those lead guitar lines circling the riffs like hideous vultures in songs like "Soziopath" and "Reset" substantiate the band's claims to Brave Murder Day worship, and I think I know enough about loneliness to sense a preponderance of it in "Rigidity."

The album maintains a more reserved pace as well, preferring to build at a moderate pace over longer tracks than to whip up hell like a headless chicken (or goat, or sheep, or whichever farm animal the kids are sacrificing these days). Of course, with so much time on its hands, Death, My Salvation can't resist tearing into a few fast-paced frost storms now and then, but in addition to the suggestions of doom, some elements of blackgaze are sprinkled in to add more flavor to the traditional black metal passages. I like metal genres based around staring at footwear as much as the next guy, but when you hear the combination of echo and evil galvanized as punishingly as Gateway To Selfdestruction, a band that doesn't even really play metalgaze, it makes you wish the other players in the scene could rediscover the frosty side of their roots.

The performances are all very tight and professional for such a new and unknown band, but one in particular deserves mentioning. Vocalist Mara delivers a mixture of shredded, anguished sounds ranging freely from the raggedly harsh to the passably clean, all of which could mean a bright future [read: cold, sunless future] as a versatile and sought-after black metal frontwoman. "Silence" showcases her skills particularly well, but from the first creaks to the last shrieks, all of Death, My Salvation does a more than adequate job of advertising her ice-cold technique. The sudden scream at the end of "Mirrors Of Despair," brief though it may be, kills off the last vestiges of album with a suitably discomforting tone.

Gateway To Selfdestruction may not have invented their own genre, as is all the rage these days, but they have instead opted to settle with a full, well-defined sound and sphere of influences within which they can exercise their considerable songwriting and performative talents. I regard Death, My Salvation among the best black metal releases and debut albums of 2016, and you should, too.

Oh, and as far as "The Blessing" is concerned, I was definitely talking about The Cranberries.