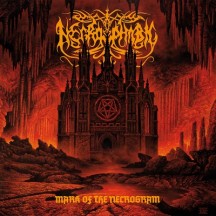 
More than twenty-five years into the game and after a tumultuous 2013 that resulted in parting ways with longtime vocalist, Tobias Sidegård, Necrophobic are back with one of the best releases in their career. The Necrogram is alive and immutable.

The unholy sigil reappears in Kristian Wåhlin's cover art after 16 years to point out that Mark Of The Necrogram is not just another album by a band that - miraculously - hasn't had a misstep yet. And even though Necrophobic never had the cult following of their fellow Swedes, Dissection, the fact remains that their Scandinavian slab of black/death metal has consistently been first-class.

The homecoming of The Nocturnal Silence vocalist, Anders Strokirk, has brought back the wicked roars heard in the band's debut and the return of guitarists Sebastian Ramstedt and Johan Bergebäck has restored the monstrous and grotesque sound that was slightly missing in Womb Of Lilithu. Mark Of The Necrogram is a sinister and uncompromising musical offering with dark and evil lyrics to accompany the ferocity and abrasiveness of the songs. At the same time, it brims with melodic catchiness and infectious metallic hooks with the massively addictive "Tsar Bomba" as the most obvious example. That said, it was the black 'n' roll riff of "Crown Of Horns" that actually made me want to get up and dance.

The comparisons with Dissection are imminent since upon the first notes of the title track it feels like Jon Nödtveidt has come back from the dead to haunt your unsuspecting ears once again. If you do yourself the favour and continue listening, you'll be pleased to find out more elements of the absolute best in the extreme metal genre. The vicious opening riff of "Sacrosanct" is taken straight from the most hellish inspirations of '80s Slayer and the majestic "Requiem For A Dying Sun" features an epic black harmony in the vein of Immortal's "Tyrants" or I's "Warriors".

I sincerely hope Mark Of The Necrogram will help Necrophobic gain the popularity and recognition their outstanding discography deserves. Signing with one of metal's biggest labels, Century Media Records, is a good omen. In any case, the members of the band are pretty clear regarding their intentions: "We've been doing music that feels honest and true to ourselves. No matter what's trendy at the moment. No matter how the winds blow. All bands want to sell more and more albums, so do we, but that is not our goal. If it happens, it happens, but again, we write the music we want to listen to ourselves."

I couldn't agree more with that statement. This is how great albums that stand the test of time are made.

"We are legion, we are one,
We are the crown of creation,
Deemed to march with open eyes,
We are the envy of gods"