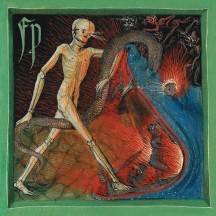 - a fellow user and reviewer who was clever before I was.

Some people may be a bit more reticent when it comes to another one-man black metal band doing another black metal album with nothing but a few over-ten-minutes-long tracks and a cover art that looks like that weird medieval art. But hey, at least it's not a black and white picture of a forest or some badly designed pentagrams. And also it's extremely good, so there's that. It's quite weird that we had to wait five years for it, but I'd gladly wait five more if the next one is half as good.

Funereal Presence, whom up until now I misspelled as "Funeral Presence", is, as stated, a one-man black metal band. It belongs to one individual who goes by the name of Bestial Devotion and who was/is in Negative Plane, although Funereal Presence started releasing stuff around the same time that Negative Plane stopped. So despite the long time it took for Achatius, we can trust that this is a musician who's been at it for about 15 years. And since we're finally talking about the music, you can clearly tell that BD was a drummer in his previous band, because damn do most one-man black metal bands suck at drums and this one absolutely excels at them.

Achatius is clearly second-wave worship, especially Darkthrone's grim and riffy stuff, but even if the core of the music is olden and raw, there's definitely a fair deal of an original approach to songwriting that clearly puts Funereal Presence in a slightly different league. Not only is the songwriting surprisingly clever and at times daring, but also, even though it feels old in its sound and sprawling riffs, there's a constant level of unexpectedness. Not really avantgarde levels of surprise, since a few of the riffs do repeat quite often, but I am reminded of the sudden stop-cowbell-riff sequences that are (probably intentionally) hilarious. Though don't be fooled, this isn't a "so bad it's funny" type of hilarious. Even outside the music, the album cover and the bandcamp artist picture have this subtle self-aware, tongue-in-cheek characteristic to them.

Mostly it feels like Achatius tries to meld two different approaches to the songwriting. Firstly, a lot of it sounds like either the aforementioned second-wave black metal but also a lot of it is so melodic (take this adjective with a grain of salt) that it feels taken straight out of the heavy metal days, so hearing that combined with the somewhat minimalist and extremely raw approach to atmosphere and synths is fantastic. And secondly, despite the riffs' inspiration, a lot of them feel very meandering and odd, as if they were turned on their heads and mauled. It's hard to put into words but there are a lot of riffs that the bands who Funereal Presence emulate never would have come up with.

I can't really find much negative to say about this album because even any issue I'd find in the raw production, it actually just gives this album more of an atemporal charm. There's not really any instrument that feels left out due to it being performed by one person and the songwriting manages to be both extremely forward-thinking and shamelessly retro.

Wherein you listen to this bloody bastard of an album.

Written on 17.03.2019 by
RaduP
Doesn't matter that much to me if you agree with me, as long as you checked the album out.
More reviews by RaduP ››